Art of War: Pasadena Painter Captures the Essence of Afghanistan

Hidden under a sheet and surrounded by Afghan rebel soldiers in an ambulance, Peter S. Adams of Pasadena bumped his way across the legendary Khyber Pass into Afghanistan.

In billowy shirt and draw-strlng pants, he had adopted the look of a moujahedeen, or holy warrior. He wore a traditional Nuristani hat to cover his golden hair, now dyed black. His long beard and eyebrows were also dyed.

The only trace of his surfer good looks were his blue eyes. He had decided that contact lens to make his eyes look brown wouldn’t be worth the trouble. 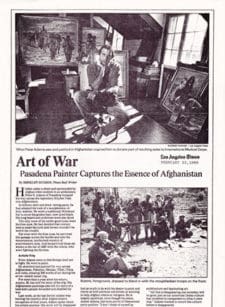