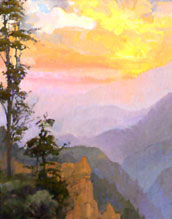 The San Gabriel Mountains are a mere five minutes from my home in Pasadena, CA. I often hike there with my five dogs to paint late-afternoon vistas such as Sunset View From Mt. Lowe Rendering the details of these scenes is not as important to me as trying to capture the moods of nature with all its grandeur While painting out of doors, I often feel in tune with the words of William Wendt: “Here, away from conflicting creeds and sects, away from the soul-destroying hurly-burly of life, it feels that the world is beautiful, that man is his brother and God is Good. ”

I’m inspired by the changing light, the variations in cloud formations, the rugged outcroppings of boulders and the grand trees that have withstood the extremes of nature. While painting trees, I am always conscious of my training in Bonsai, the Japanese art of pruning miniature trees to have the character and beauty of larger ones.

A lone pine may stand proud and majestic, grow downward from a cliff looking like a cascading waterfall, or appear gnarled and wind-swept like the cypress in Pescadero Sunset I must admit, when I paint trees I shape and edit them to my liking.

My interest in Bonsai and other Asian art forms goes back to my paternal grandmother. An amateur painter and avid collector of Eastern art, she traveled throughout China, Korea, Japan and Indonesia in the 1920s, bringing home jade carvings, netsukes, Japanese screens and Chinese inkbrush paintings. Her home in Pasadena looked like an Asian art museum, and every time I visited she insisted that I mark the pi . eces I wished to inherit. Selecting one object over another gave me an intimate appreciation of Oriental art-especially the high quality of craftsmanship and elegant design. I became entranced by the exotic costumes. And my perspective of nature was molded by Sung Dynasty landscape paintings showing tremendous mountains dwarfing men with walking sticks and Japanese gold-leaf screens with their decorative arrangements of bamboo, birds and fog. 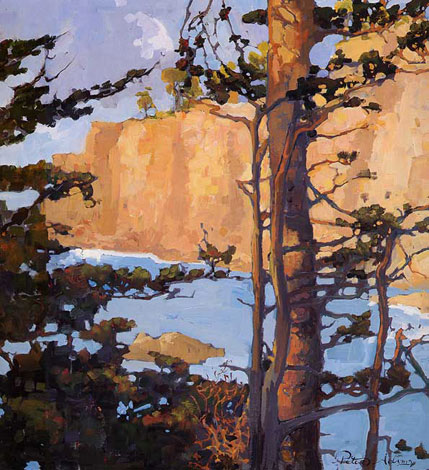 Years later, when I entered the Lukits Academy of Fine Art, Los Angeles, CA, I found a way to combine Eastern design concepts with Western boldness and depth through atmosphere. Before opening his school, Theodore N. Lukits [1897-1992] had been a successful portraitist, muralist and winner of the Prix de Rome in 1919. His penchant for history and antiquities was apparent in his studio, which was filled with brocaded silks, Tang Dynasty horses, antique kimonos and Chinese robes, Kwan Yin statues and a magnificent Chinese Peking Opera headdress. Also prominent was an array of Lalique, Tiffany and rare ancient glass and hundreds of plaster casts and statuettes carved from marble and alabaster.

Mr. Lukits believed that knowledge of values was critical to understanding color, so I spent my first two years at his school drawing from plaster casts. When I began my studies of color, many of his Oriental objects became the subjects of my work as well. One method he used to teach color harmony was to fight objects with red, blue and yellow bulbs at a variety of angles, making them even more colorful than they already were. These exercises replicated outdoor atmospheric lighting, becoming useful to my plein-air paintings. 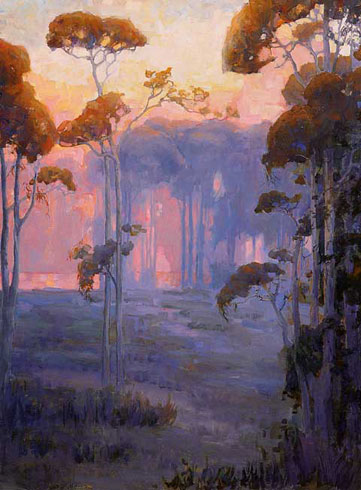 Mr. Lukits’ remarkable sense of color and unmistakable personal style were inspirations I took with me when I made the first of two pilgrimages to the East. My first trip in 1980 began in India, where I spent three months. Most Indians have never seen an artist working in the field and referred to my work as “making a photo.” Enormous crowds gathered around me, and children tried to steal my paints while their parents stood by laughing. One merchant in a street bazaar was so incensed by mystealing the audience for his fruit stand that he destroyed my painting on the spot!

I learned crowd control quite by accident. On a hot day I removed my shirt, and suddenly the harassing stopped as people murmured the word Brahmin. Apparently the string around my torso, which was connected to my wallet and passport inside my trousers, resembled the jania traditionally worn by Brahmins, the highest priestly caste in Hinduism. From that point forward I enjoyed the reverence of the crowds by lifting my shirt, exposing the string and pronouncing myself a Brahmin.

I came to love the East’s Aride array of colorful cultures. My travels in Burma, Thailand and Hong Kong, followed by three months in the People’s Republic of China, introduced me to costumes and philosophies both elemental and sophisticated. Because I traveled on foot much of the time, I ended up in remote villages where it was unusual to see an occidental. As curious about me as I was of them, the Chinese were more intrigued by the hair on my arms than my art. Quietly and cautiously they approached and gently blew on my arms to watch the hairs wave. 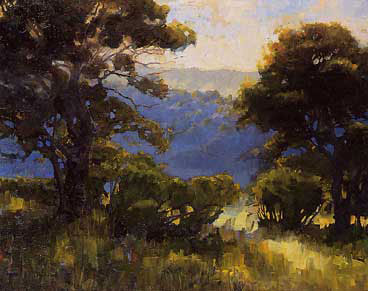 My second extended trip East in 1987 included China and the Autonomous Province of Tibet, Pakistan, Afghanistan, India, Nepal and Bhutan. Even though the war between the Soviets and the Afghans was escalating, I was determined to paint the Afghani culture and the land they fought valiantly to preserve. It took a month of negotiations, but I managed to get into the country by arranging passage through a group of Mujahideen (freedom fighters). I had grown a beard, dyed my hair black and wore Afghani garments. The Mujahideen drove me to the Pakistan/Afghani border in an ambulance and told the guards that I was a war casualty being returned for burial. As I painted in the small villages of Afghanistan, a 13-year-old boy always stood guard with his AK-47 Kalishnikov rifle. Only after I returned to the United States did I learn that the Soviets had placed a $10,000 bounty on Americans, dead or alive. Although the Mujahideen could have turned me in for what was to them an enormous amount of money, they treated me with respect and kindness. 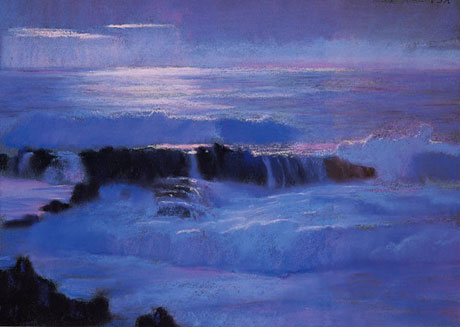 I made more than 100 paintings while on that last trip, and in 1988 they became the subject of an exhibition at Adamson Duvannes Galleries, Los Angeles, CA. Because of the poor medical conditions I had seen in Afghanistan, I donated proceeds from the sales of Afghani and Pakistani images to the International Medical Corps. During the three opening-night events I got to meet enthusiastic crowds. The first two nights I dressed in Occidental attire. The third night I wore an eclectic mix of costumes I had collected on these trips: a heavily brocaded Chinese jacket, large Tibetan hat, earrings from India, trousers from Thailand, two long knives and assorted jewelry from Afghanistan and Pakistan and a black braided wig. One could say I wanted to be noticed … and I was. That night I met a young woman named Elaine Shelby, who became my wife two years later. 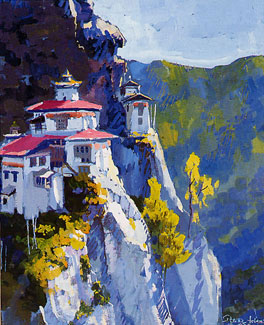 Born in Los Angeles, CA, in 1950, Peter Adams is a fourth-generation Californian. He began his formal art studies in 1969 in San Miguel de Allende, Mexico. He then studied briefly at Otis Art Institute and Art Center College of Design, Pasadena, before finding a mentor in Theodore Lukits at the Lukits Academy of Fine Art. A signature member of the Pastel Society of America, the Oil Painters of America and the Plein-Air Painters of America, Adams became president of the California Art Club in 1993. Along with his wife Elaine, who serves as the club’s newsletter editor, he is working to revitalize the 87-year-old organization founded by Carl Oscar Borg, Hanson Puthuff and William Wendt. An aggressive program Of exhibitions, lectures, field trips and networking among the group’s 700 members is aimed at promoting classical training and high artistic standards in traditional fine art.

As a result of his interest in Asia, Adams became acquainted with the Pacific Asia Museum, Pasadena, and its director David Kamansky. Since 1995 Adams has served on the museum’s board of trustees. The PAM building, designed in the style of Northern Chinese architecture, was the former home of Grace Nicholson, an Oriental art dealer. It is a fitting place, says Adams, to call his second home.

Elaine and I surround ourselves with fine art objects collected in the East and the West. The decorative qualities of Imari porcelain and the spiritual messages representcd by Buddha, Kwan Yin and Lohan sculptures remind me of the importance of looking at nature as two-dimensional design, as three-dimensional space and as a spiritual retreat. As Asian philosophy suggests, nature is a centering force within which one finds peace and calm. Many of us go about our lives not taking the time to see or experience nature. I feel it is one of the duties of artists to reunite humanity with nature, and I hope that my landscapes remind others of the intimate interrelationship we share with all things.