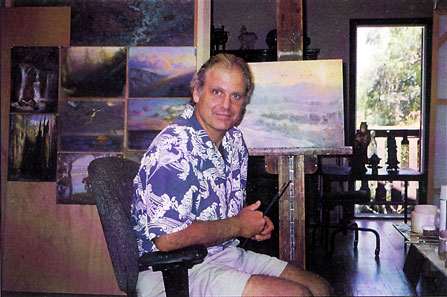 You only have to look at a Peter Adams’ painting to know the artist is locked in a passionate love affair with nature. If It’s not surprising that his home and studio in Pasadena, California, are set on a one-acre lot that offers the beauty and seclusion more reminiscent of a wooded retreat than a booming city. Adams has only to walk onto the deck outside his studio to view the magnificent San Gabriel Mountains or cast his eyes downward and enjoy a myriad of flowers and Bonsai trees. It’s an inspirational setting and one that Adams is grateful to call his.

A native Californian, Adams moved to Pasadena 18 years ago, initially sharing a home with his aunt. “She was a sculptress, 6’2″, with a mouth like a sailor and a menagerie of animals that included 9 or 10 dogs, 9 or 10 cats, a baboon, a hyena, and otters,” he laughs. Adams purchased his current home about 12 years ago, charmed by the house, which had been built in the Thirties by a ship builder, and delighted with the studio.

“A dentist had owned the house,” Adams says. “He was an amateur artist and built the studio over the garage.” Since moving in, Adams and his wife, Elaine, have made several changes to the property, including building a waterfall in the backyard, adding some 50 Bonsai trees, and building an office under one of the studio decks. Adams also spends at least an hour a day working in his flower gardens. 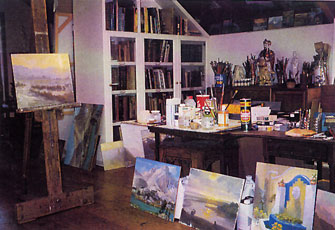 “My office is for the California Art Club,” says Adams, who has served as the group’s president since 1993. “Elaine, an assistant, and a couple of volunteers work there. I’m president of the club, but Elaine does most of the work, including publishing a newsletter at least eight times a year.” Adams also is a signature member of the Pastel Society of America, Oil Painters of America, and Plein-Air Painters of America and has served on the board of trustees of the Pacific Asia Museum since 1995. 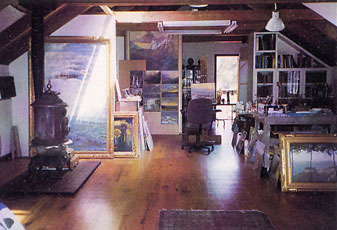 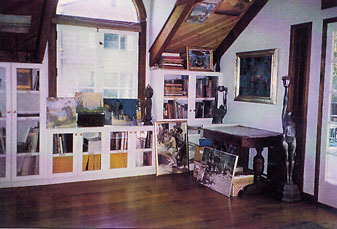 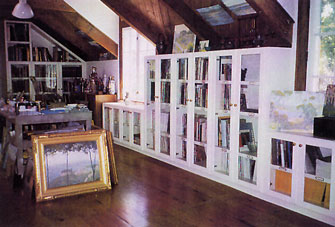 In the studio above, it’s not unusual for Adams to be working on 10 paintings at once. “If I’m preparing for an exhibit,” he says, “I might be working on 20 or 30 paintings. I think about how they look together, so I’ll work on many of them at the same time to make the exhibit look like one painting.”

The 1,000-square-foot, A-frame studio is bright, open-and organized. Adams admits that his penchant for neatness is not inborn, but rather a trait instilled in him by Elaine. “I know artists who can spend 20 minutes looking for a brush,” he laughs. “Lack of organization is, perhaps, the greatest killer of artists.” He goes on to relate an incident that illustrates just that. An artist took a painting to a gallery, where the owner told him he might have a buyer for it. But, because the gallery was going to painted, he asked the artist to keep the painting at his studio for the time being.

The gallery owner later called the artist, saying he had a buyer willing to pay $10,000 for the painting. Unfortunately, the artist had already painted over it. Why? “Because he didn’t have another canvas ready and didn’t want to take the time to prepare one,” Adams says.

Wood floors and a wood ceiling give the studio a warm feeling, while three skylights and three sixfoot-high arched windows bathe it in natural light, which Adams supplements with track and fluorescent lighting. Double doors lead to a 500 square-foot deck on one side of the studio, while another deck-this one about six feet wide by 20 feet long-is located at the opposite end. Bookcases line the outside walls of the studio, housing thousands of books Adams has collected over the years. “A lot of them are very old,” he says. “Many are rare books on obscure artists from the 19th century and others are old illustrative books. I love books.” Adams also listens to books on tape as he works, replaying many of them two or three times. 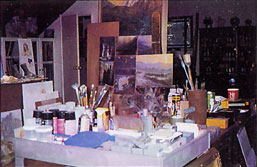 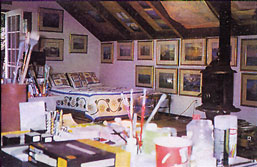 The space includes a small kitchenette with a refrigerator that serves as storage space for Adams’ paints. Behind a bookcase is a small bathroom, while a bed occupies one corner of the studio. “I can lie on the bed and look at my paintings from 20 feet away,” Adams says. “Or, I can go out onto the deck and look at them from there.”

That deck is clearly a favorite spot for Adams, who often moves an easel out there to paint, surrounded by eucalyptus, pine, redwood, and sycamore trees. “I like to be out there in the afternoon,” he says. “It can get hot in the studio in August and September, so it’s nice to work outside. It’s like being in nature. When it’s real hot, I’ll work outside on the deck at night with halogen lights.” On those rare occasions when heat is necessary in the studio, Adams stokes up a charming wood-burning stove.

Paintings line the studio, some hanging from the walls, others propped up on the floor, awaiting final touches. A few bronzes and antique prints are displayed, along with urns and incense holders that Adams collected during two trips to the East. He uses some of themmade of wood, cinnabar, or porcelain as brush holders. “They’re very decorative,” he says.

Adams heads to his studio early each morning, usually by 6 a.m., and often works into the evening. It’s a place he clearly loves. “I enjoy my studio,” he says. “It’s part of me.” 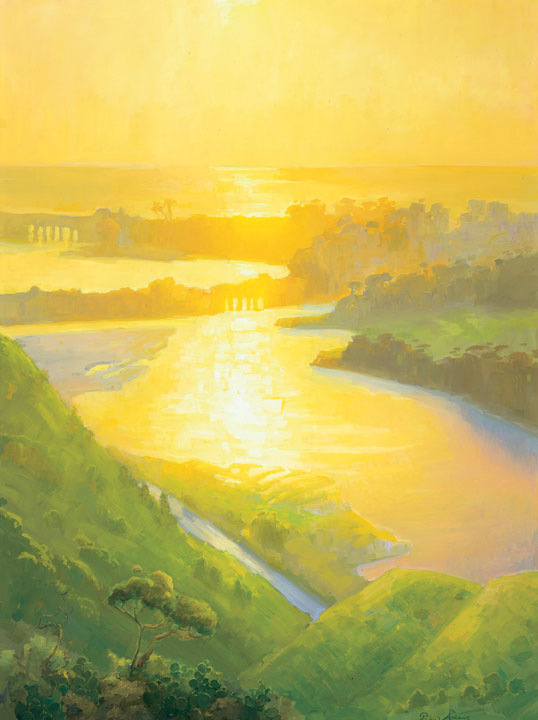