Afghanistan is a world away from Peter Adams’ comfortable home and studio in Pasadena, California. Yet the war against terrorism being fought in the Middle East, as a consequence of the September 11 tragedy, has a haunting immediacy for him. In the fall of 1987 he was the first American artist to work on location during the Soviet occupation of Afghanistan.

Adams’ visit was part of a seven-month Asian painting trip to Pakistan, Bhutan, Tibet, China and India. “I have always been fascinated by ancient civilizations, with their wonderful art forms and customs,” he says. “But these cultures are slowly disappearing, and nowhere is this as evident as in Asia. Someday it will all be gone, just as our American Indian culture has vanished in comparison with what it once was.” (In 1981, Adams was also the first American artist to travel unescorted through the People’s Republic of China.) 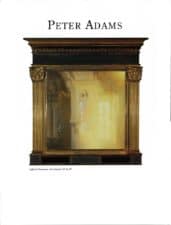