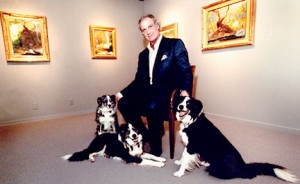 Peter Adams sits in Hollis Gallery with his dogs,
from left, Smoochie, Jaipur and Panda. Photo courtesy of Mike Mullen

“The gnarled root system of this majestic sycamore in back lighting appealed to me. In the background are the hills of the San Gabriels, including Mt. Lukens and Brown Mountain. This site is between Oakwilde Campground and Switzer Falls.”

Peter Adams was describing one of the paintings in his current exhibition at the Hollis Gallery. Titled “Hidden Pools of the San Gabriels,” this collection of recent oil paintings, executed on board, was created au plein air over a period of some four or five months

“I spent months hiking around to find the perfect spot to paint,” Adams said. He combed the water sheds of the mountains and canyons, finding what he called a surprising amount of water in the hills and vales. Ponds. Pools. Streams. Waterfalls.

And Adams not only paints lovely California water-filled landscapes, but it is evident that he knows well the San Gabriels. He can call by name the native oaks, sycamores, black walnuts, alders and wild eucalyptus. He knows the burial site of the Brown Boys, the two sons of the pre-Civil War era abolitionist John Brown. 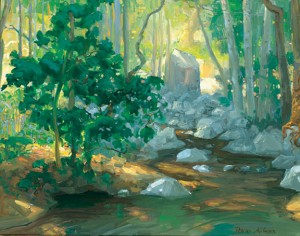 Sanctuary; Off the Gabrieleno Trail,
Oil on board

He and his wife Elaine have studied area Native Americans, members of the Shoshone/Tongva line. In 1771 these natives were renamed Gabrieleno by the Spanish missionaries of the Mission San Gabriel Arcangel, he said, discussing the history of one of his paintings. The Gabrielenos generally lived in the foothills near streams for their water source, and in areas typical of this painting (titled “Filtered Light in the Arroyo Seco”), where they would hunt for deer and rabbit, and gather acorns and pine nuts.

For more than 20 years, Adams has hiked the San Gabriel Mountains. He loves the Gabrieleno Trail and these days his dogs Jaipur, Smoocbie and Panda accompany him on morning runs and painting forays. Adams unabashedly admits to a fondness for bathing in the rocky pools with his pooches.

At a recent preview of the works, Adams strolled around the gallery discussing his paintings, giving a mini nature tour of the area. Fortunately, for those not in attendance, word texts accompany the paintings. It is as though Adams were there in gallery, giving each viewer an insight into his thoughts.

“This location is just above Devils Gate Dam and shows an area where two streams come together. In the background are the oaks, cottonwoods, and eucalyptus of Hahamongna Watershed Park, formerly know as Oak Grove Park. In the foreground, light peers through a peppertree and the green winter grass,” Adams said of the painting titled “Afternoon Glow.”

Of   “Late Afternoon Overlooking the East Fork of the San Gabriel River,” Adams said, “This is an area that I particularly enjoy painting because of the many layers of silhouetted mountains, which I find reminiscent of the Chinese landscape paintings created during the 12th century Southern Sung Dynasty.”

Several works, particularly two pastel of sunset from the Glendora Pass, are decidedly Asian in feeling. Other oils have a Cezanne-like approach. Light and shadow play on the watery pools, which reflect the blue of the sky. Adams’ use of color is excellent, his compositions thoughtful and his brush strokes painterly in nature. 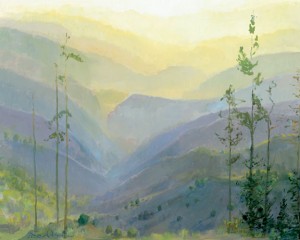 Late Afternoon Overlooking the East Fork of the San Gabriel River,
Oil on Board

Some works are completed on site, while others get a finishing touch in his Pasadena studio. He executes both oil paintings and pastel drawings on treated Masonite board. This works better in the wild, said Adams, as the board is more durable than thecanvas, and the paint does not crack. The end-results are pure Adams.

For although Adams has studied in the plein air tradition and works on site, he has his own unique approach to painting California mountains and the California coast.

The painting “Sanctuary; Off the Gabrieleno Trail” is particularly lovely and typifies Adams’ use of composition, color, light and shadow. Adams said that studying with the great landscape painter Theodore Lukits (1897-1992), at the Lukits Academy of Fine Arts in Los Angeles, had a profound effect on his use of color.

“Lukits was a fabulous colorist who emphasized lighting,” Adams said. Each painting in the exhibition presents a slice of Gabrieleno nature, a vision of native plants and trees of the area and of the invigorating waters of the hills. Pristine landscapes. Real art. Unadulterated Adams.
Priscilla Fleming Vayda is a free-lance writer based in Los Angeles. Write to her in care of the San Gabriel Valley Newspapers, Features Department, 1210 N. Azusa Canyon Road, West Covina, CA 91790, or by e-mail [email protected].