No one in California has built more, better, or more magnificent Art bridges than Peter and Elaine Adams of Pasadena.

They have built bridges of understanding and cooperation between formerly isolated art enclaves, like plein air painters and studio painters, and between diverse art groups, like native Californian artists and immigrant Chinese artists. They have also bridged the past to the present, reviving appreciation for the early California masters, and they are bridging the present to the future, founding new art institutions from which future California masters will emerge.

A more substantial Adams-built art bridge is the one between traditional Realism and Contemporary art; and yet another major bridge is the one they built betweentwo realms that frequently are remote from each other: Art and Business.

Together Peter and Elaine Adams have also built bridges of cooperation between widely disparate cultural institutions, like the Autry Museum of Western Heritage and the Pasadena Symphony, the Los Angeles County Museum of Art and the Ryman Carroll Foundation, a scholarship program that provides art training to high school students. And Peter serves on the boards of, or as an advisor to, cultural organizations across America, including the Pacific Asia Museum in Pasadena, the American Society of Portrait Artists in Montgomery, Alabama, the American Society of Classical Realism in Minneapolis, and the American Renaissance for the Twenty-First Century, in New York City.

Peter and Elaine have accomplished this remarkable roster of Art construction jobs through what stands today as their most imposing project, their personal Golden Gate to the world: the California Art Club. Begun in Pasadena in 1909, the Club had nearly gone the way of its founders by 1993, in that year having only 70-some members. That was the year Peter Adams was asked to be its president. Today, just eleven years later, the California Art Club has more than 3,000 members. In addition to its Pasadena headquarters, it now also has regional chapters in San Diego, San Bernardino, and San Francisco, with additional chapters being planned. And it now has a national presence as the art organization to watch and try to emulate, for cultural leaders across the country.

Before Peter Adams became its president, the Club’s activities were irregular meetings, and painting sessions. Today, Club members not only paint-and sculpt-but also participate in a-wealth of activities ranging from painting lessons to master workshops, from paint-outs to picnics, from museum tours to quarterly exhibitions at the California Art Club Gallery located at The Old Mill in San Marino, and from regular meetings to educational lectures that frequently are open to the public. These increasingly popular lectures identify and discuss key current Art World key issues, such as, in 1999, traditional art and its place in the future, and, this coming May, the current art crime epidemic. 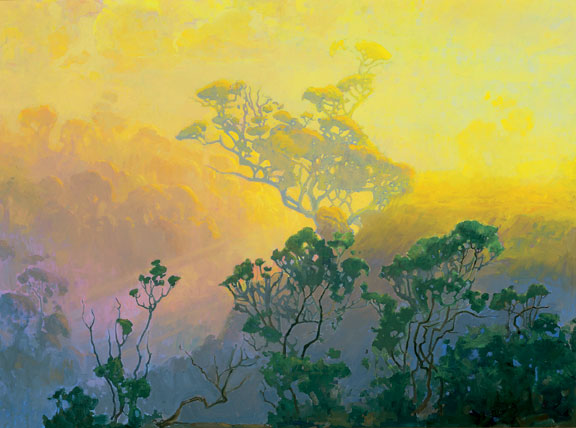 Once isolated from and foreign to Contemporary art, the members of the California Art Club now work closely with Contemporary artists, and they have held exhibitions in Contemporary museums, including two at the Frederick R. Weisman Museum of Art at Pepperdine. The Weisman is world-famous for its collection of works by Christo, Jim Dine, Frank Stella, Edward Ruscha, David Hockney, and other masters, from Pop to Postmodern. Although the California Art Club still stands as a champion of traditional painting, its membership now includes numerous Contemporary artists, dealers and collectors, and lovers of Contempo-rary art sit on the Club board, like Jerry Solomon, whose Art Centre on La Brea shows works by masters like Robert Motherwell, Emile Gruppe, Sam Francis.

Before, the Club had a one- or twopage “Bulletin” that was issued once in a while by and for Southern California painters. Now it has a hefty highly professional periodical which is called a newsletter but which in fact is a plain-English journal that publishes articles not only by artists but also by such art experts as Jean Stern, Executive Director of the Irvine Museum, and Alfred C. Harrison, Jr., President of the North Point Gallery in San Francisco. 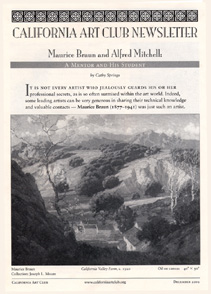 Before, the California Art Club was for adults, and only adults who knew how to paint. Four years after Peter became president, he and Elaine established the California Art Academy and Museum, which to artists of all ages offers real academic training (such as two years of blackand-white drawing before graduating to paint).

No couple could possibly accomplish so much without first building a perfect bridge to each other, which is what Peter and Elaine quickly did after they met at a gallery show of his painting. He is a classically trained professional painter, and an art teacher, and an art historian, having published on such topics as England’s Royal Academy of Art. She is an astute businesswoman, a masterful community organizer, and a professional writer—and Editor-in-Chief of the California Art Club Newsletter. All those talents, pooled produced, to coin a phrase, a powerhouse of bridge-builders.

Their pronouncements are anything but civil engineering English, however. They speak clearly, simply and concisely in language anyone can understand, and what they say makes perfect sense to any thoughtful person. For example, Peter Adams says: “It would be nonsensical to say that there should be one type of music and that everyone must like it. Classical, popular, country or rock are all different and valid forms of music. The Art World should adopt the same tolerance. Traditional painting and sculpting should be accepted as being as important as contemporary-modern forms of art. Not that one form is better than the other, but different with different criteria.”

The secret of his success is also simply and profoundly and compellingly stated. “Elevating the human spirit and arousing a sense of discovery is what excites me as an artist,” Peter Adams says, and that precisely is what he has done for more than a decade now as President of the California Art Club.

Noting that 75% of the Club’s membership are now Californians, the balance being from across the country, and few from Europe, Elaine Adams explains her own secret of success, which is the essence of her and Peter’s compelling message: “In past years, a lot of people who loved art were pulled away from it thinking that Art didn’t include them anymore. So our most important mission has been to bring people back to what they love. The Club does this in many ways, especially education, all of which communicate to people that Art is alive, that it’s passionate, and that they are welcome in Art—and above all that they are not alone, but part of a great, dynamic family.

We are living in a high-tech age that too often separates us from Nature, from life. Art calls you back to life away from your computers and spreadsheets. Even the most business-focused people feel its pull, because art allows you to rediscover your humanity, and people crave that. This is why Peter and I think of the California Art Club as a vehicle. Perhaps we jump-started it. But now it’s taken on a life of its own, and it’s transporting more and more people back to what they love.”