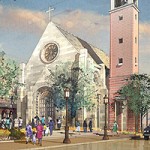 The new design for the USC Caruso Catholic Community Center includes a European limestone church that will seat up to 350.

American artist Peter Adams, the nationally renowned plein air landscape painter, has been commissioned to create a series of paintings for the University of Southern California’s Caruso Catholic Center, a 20,000-square-foot structure that is scheduled to break ground in 2010.

Adams was selected by the Center’s Liturgical Arts Committee to paint the traditional fourteen Stations of the Cross, which depict the events surrounding the crucifixion of Jesus. The paintings will be installed around the perimeter of the nave, the central open space of the church.

For this commission, Adams inteneds to harness his experience as a plein air painter to emphasize the passage of time with shifts in light and shadow, as the fourteen Stations represent events that occurred from early morning until late afternoon during a single day.

“Most of the renderings I have viewed of the fourteen Stations do not emphasize the many hours that it took Jesus to walk the Via Dolorosa to His crucifixion, and without understanding the duration of His travels, it is difficult to fully appreciate the pain He suffered,” Adams said.