Peter Adams has carried his painting supplies in remote villages in Bhutan and Tibet, to war-torn Afghanistan, into the crowded streets of New York City, up into the Sierra Mountains, inside opera houses, into candlelit cathedrals, and — most recently — to Jerusalem. In each location, he gathered plein air sketches, digital photographs, historic accounts, and firsthand impressions of subjects that became the focus of his studio paintings. That studio is in Pasadena, California, on the second floor of a building that has been a storage facility and the headquarters for the California Art Club (of which Adams is president), and is now the offices of American Legacy Fine Arts, a gallery owned by his wife, Elaine Adams. 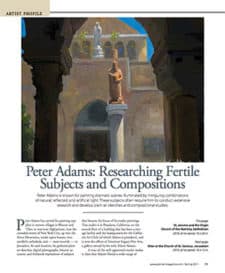