The California Art Club has brought attention and respect to the genre of realist art.

The story is now part of California Art Club lore, often repeated and well known by its members: When California painter Peter Adams was first asked to become president of the club in 1992, his initial reaction was, “Absolutely not.” He considered himself an artist, not presidential material. Plus, he says, “I don’t even like to join things.” But later, as he was relating the request to his wife, Elaine, she challenged him, saying, “All you do is complain about the art world. Why don’t you do something about it? Besides, you don’t have to do anything—I will do all the work.” 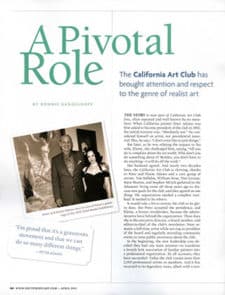