A Gold Mark for Artists' Cohesion

A century ago, the California Art Club was launched by a handful of European emigrés and plucky Americans who decided to make creativity their calling. In those days, being an artist was not so fashionable, but the founders included many now considered the greats of early California art such as Franz Bischoff, Hanson Puthuff and William Wendt.

Today, the club’s emphasis on representational style and academic subject matter ( landscapes. still Iifes, portraits) may be thought stodgy, but realism may be having something of a resurgence. The club, celebrating the centenary of its Gold Medal Juried Exhibition, is filling the galleries of the Pasadena Museum of California Art through April 24 with 200 selected works from 150 of its members (all the works are for sale). 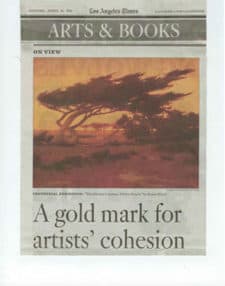