Lead donors for Pasadena’s Enduring Heroes monument had the opportunity to meet artist Christopher Slatoff, tour his studio and see his progress on the monument to Pasadena’s hometown heroes. Slatoff was commissioned to create a bronze sculpture to honor Pasadena’s fallen soldiers, which will be installed in Defenders Park near the Colorado Street Bridge and dedicated on Memorial Day 2017. 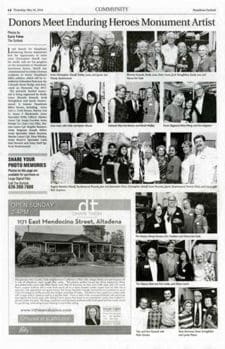