Nearly six feet four and an imposing 250 pounds, Armin Carl Hansen (1886–1957) was as powerful as his paintings. When he entered a room, it was as though a blast of salt air had blown in from the Pacific. According to Los Angeles Times art critic Antony Anderson, who wrote on May 23, 1915, “Looking at the paintings by Armin C. Hansen . . . , you will at once and inevitably conclude that the painter of such big men and breezy seas must be big and breezy himself. No other sort of man could possibly have done them…. You will be right, for Armin Hansen is big and young and strong—the living embodiment of his own pictures.” 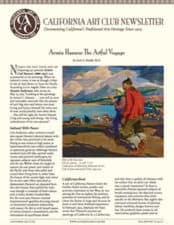