Two of mankind’s most innate drives are hunting and creating art. By painting animals and hunting scenes on cave walls, primitive man engendered a powerful belief system. He believed that by capturing an animal’s spirit as an image the animal could be overpowered. By the Middle Ages, civilized European nations applied rules of etiquette to the hunt. In Germany deer and game birds were reserved for Royal hunters as “Hoch-wild” (high game). Non-royals were permitted to hunt “Niederwild” (low game), which included hare, fox, and non-game birds. As dichotomous as it may seem, dedicated hunters are quick to defend their activities as catalysts for land preservation and environmental balance. Their opportunities to closely study nature and the characteristics of wild animals in their surroundings instill in hunters a deeper appreciation for the wilderness. The first of nine children, Karl Clemens Moritz Rungius, was named after three of his uncles, was born in 1869 in Risdorf, now part of Berlin, Germany. 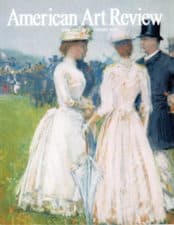