Francois Jean Baptiste Benjamin Constant (1845–1902), later known as Jean-Joseph Benjamin Constant, had an art career that was not only remarkable and legendary, but one that was multifaceted. He was a brilliant colourist who specialized in painting historic subjects and “Oriental” themes. He was a coveted art instructor who subsequently taught future leaders in the American Impressionist movement. He was a muralist whose works encompassed grand epic themes and allegorical motifs. In his later years Benjamin-Constant became one of the world’s most sought-after portrait artists, painting royalty and notables on two continents. 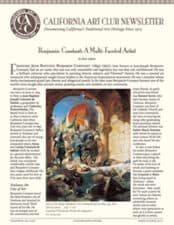