Although his name is not widely known today, Franz A. Bischoff (1864-1929) was once celebrated across the United States. Best known for the sumptuously faded pink roses he painted on china and canvas, Bischoff drew attention at both the 1900 Exposition Universelle in Paris and the 1904 Louisiana Purchase Exposition in St. Louis. In 1910, he helped launch the California Art Club, which went on to become the most powerful art organization in Los Angeles, and remains influential today. Transcending his temporal success, however, are his luminous paintings, which demonstrate the exceptional gifts for color and design he first honed while decorating porcelain in central Europe. 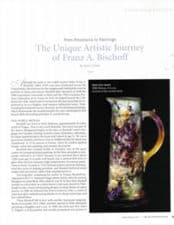