Venice is located on the North-Eastern coast of Italy at the head of the Adriatic Sea and, geologically, is a conglomeration of 120 mud islands. Its cultural history began in 452. AD with its earliest settlements consisting of reed and wood but dwellings. Positioned in what may be considered the strategic heart of Europe, Venice developed into an important seaport. Traders became wealthy merchants who proclaimed their affluence by dotting the islands with an opulent array of grand palaces, magnificent cathedrals and a maze of impressive bridges. 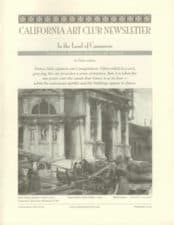