Orphaned at nine, esteemed artist by thirty-three, execution judge at forty-five and exiled at sixty-eight; Jacques-Louis David’s (1748–1825) life was led on a tumultuous path while he searched for a paradigm of virtue. When David was only nine his garrulous father, Louis-Maurice, a prominent Parisian merchant, was challenged to a pistol duel and killed. Little is known of David’s mother Marie-Geneviève Buron, except that after she became a widow she deposited her son in the care of her two brothers. David’s uncles, François 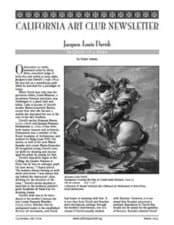