José Segrelles (1885–1969) is among the finest artists to emerge from the Valencia region of Spain—and unequalled in his unfathomable imagination. His extensive oeuvre includes futuristic and outer space themes and, later in life, religious works. He can be considered one of the greatest mystical, fantasy, and science fiction artists ever to have existed. Yet today Segrelles is virtually unknown outside his native Province of Valencia. 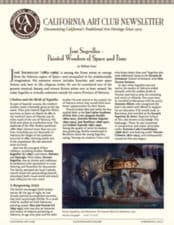