If you were to mention sailors and steamboats in the same breath in the hearing of some old shellback of a sea dog, he would probably mutter a few deep sea oaths and spring the old one about iron ships and wooden men, etc.—‘Deck hands, that’s all they are,’ says he.” Such was the controversy among mariners in the early twentieth century and such was the salty repartee of Joseph Duncan Gleason (1881–1959), as recounted from his article, “A Perilous Voyage,” printed in The Wanderlust while aboard the Intrepid. 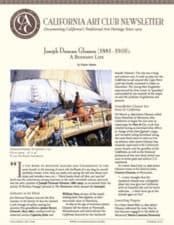