An illustrator, painter, adventurer, and visionary, nineteenth-century French artist Jules Tavernier (1844–1889) was one of the American West’s foremost talents, with a natural ability that many believed was second to none. For a brief time in the late 1870s and early 1880s, there were few others who commanded similar prices and prestige or could count a greater number of the West’s prominent citizens as clients. To those who knew him, the “little Frenchman” was a marvel. As described by Jerome Hart, editor of The Argonaut: He could do anything with a brush—or without a brush, for he could paint with his spatulated thumb. 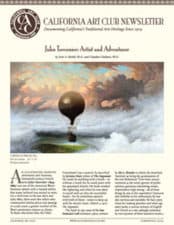