Pasadena, California is perhaps best known in New Year’s Day Rose Bowl Game and Rose Parade. The world famous parade was initiated one-hundred nine years ago by members of the Valley Hunt Club. Orange Grove Boulevard in their horse-drawn carriages laden with roses to celebrate the New Year. The Rose Parade is now viewed via television throughout the world. Yet, as anyone who has ever been to the parade can testify “the television camera don’t do it justice.” 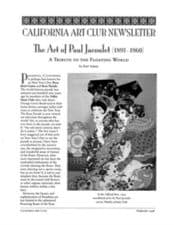