Afghanistan has exploded into the national consciousness again. Our twenty-year military presence, with short bursts of ferocious action, often lulled Americans into complacency. That national trance momentarily obscured the fact that our troops were in harm’s way in a faraway hot spot. Generally speaking, order in Afghanistan had been established and was being maintained. But an abrupt and chaotic withdrawal thrust that ravaged area front-and-centre in the headlines and on cable news stations. For artist Peter Adams, the episode carries a bittersweet poignancy. 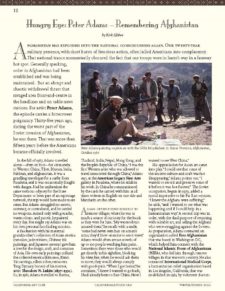