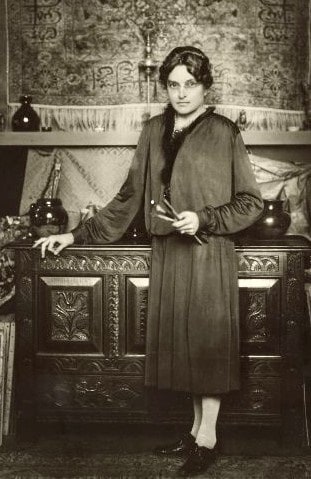 Anna Althea Hills was born on January 28, 1882 in the city of Ravenna in Portage County, Ohio. She was the second of seven children and raised in Olivet, Michigan. Her father was the Reverend Aaron Merritt Hills (1848-1935) who pastored Congregational churches for twenty years before identifying himself as a Nazarene and part of the American Holiness Movement. He was an esteemed theologian, educator, author of nearly thirty books, evangelist, and founding president of three Wesleyan-Holiness colleges: Texas Holiness University (Greenville, Texas), now part of Southern Nazarene University (Bethany, Oklahoma); Central Holiness College in Iowa; and Illinois (now Olivet) Nazarene University. He also taught theology at Asbury College and Bethany Nazarene College but was associated longest with Pasadena College (Nazarene) in California, where he taught from 1916 until 1932. Anna’s mother was Althea Alamanda Ford who passed away when Anna was only four years old. The Reverend Hills remarried twenty-one years later to Huldah Jane Frisehkorn who was thirty-nine years his junior and the mother of four of his seven children.

Anna Hills enrolled at Michigan’s Olivet College in 1898 where she studied art. She continued her art education at the Chicago Art Institute (1902) and at Cooper Union Art School in New York City (1905). In addition, she spent two years studying with Arthur Wesley Dow (1857-1922) in Ipswich, Massachusetts. Dow was an influential teacher who emphasized design principles to his student, a tenet that is integral in Hills’ work.

In 1908 Anna Hills traveled to Europe where she spent four years studying at the Académie Julian in Paris and painting in the Netherlands and England. In 1911 she spent time with her brother “Willie” Hills (presumably Charles Finney Hills (1891-1957)) who was living at Cottage Inn in the Cornish village of Lamorna. While there, she studied with prominent English landscape artist John Noble Barlow (1861-1917) in the nearby art colony in St. Ives.

In 1912-13 Hills moved to Los Angeles, and the following year settled in Laguna Beach where she and her also unmarried sister Nellie Ford Hills (1875-1946) set up a studio and taught art. At the time, Laguna Beach was becoming a popular location for artists partly due to the attractive similarities of the Mediterranean Coast in terms of mild climate, sea views, and vivid light. As did many of her contemporary artists, she developed a lighter, higher-key palette. Although she endured a severe spinal injury, she had an adventurous spirit and managed to travel to arduous desert and mountain locations to paint.

Hills became active in the local growing arts community and in 1918 became a founding member of the Laguna Beach Art Association, and served as president from 1922 to 1925 and a second time in 1927 to 1930. Anna Hills was instrumental in raising funds to acquire land for the association’s own art gallery, which eventually became the Laguna Art Museum. She was also involved with the local Presbyterian church and ran the Sunday school for ten years.

In Los Angeles, Hills began holding solo exhibitions at Kanst Gallery and with the California Art Club. Her name first appears with the California Art Club in 1914 as displaying her work in the 4th Annual Gold Medal Exhibition. Her painting technique incorporated both brush and palette knife, and she received numerous awards. Among her recognitions was a Bronze Medal at the 1915 Panama-California Exposition in San Diego; a Bronze Medal at the 1919 California State Fair; and the Landscape Prize at the Laguna Beach Art Association in 1922 and 1923.

Anna Althea Hills passed away in Laguna Beach, California on June 13, 1930 at the age of forty-eight from a heart attack. She was beloved and admired by her students and fellow artists, which included Edgar Payne (1883-1947), Granville Redmond (1871-1935), and Donna Schuster (1883-1953) who wrote an obituary in the July 1930 issue of the California Art Club Bulletin entitled The Death of Miss Hills. In honor of her dedication to the community of Laguna Beach, the Laguna Art Museum placed a bronze plaque in the museum in memory of Anna Althea Hills.