Brian Blood, a resident of Pebble Beach, California, is widely recognized as one of California’s most important plein air impressionist artists. Married to award winning artist, Laurie Kersey, they live their childhood dreams.

He began his professional life as a graphic artist and art director in Boston, Massachusetts.  Although Blood's career was successful, he was frustrated personally and realized he wanted to be a fine-art painter. A leap across the continent to California took him to the Academy of Art University in San Francisco for both undergraduate and graduate studies.  Blood and Kersey were both later instructors at the Academy of Art University for 12 years.

From the 1990s, Brian Blood has been painting full time as well as conducting landscape painting classes at his alma mater.  He also conducts ongoing workshops in his studio, and surrounding areas of Pebble Beach, California.

Primarily a plein-air painter, Blood creates hundreds of studies directly from nature, observing the ever changing light of day.  He then takes his studies and supporting reference photos back to his Pebble Beach studio to paint. He uses these studies as the basis for his larger scale works. Recently in 2017 Blood and Kersey have opened a new Fine Art Gallery and Studio located at the Barnyard Shopping Village located in Carmel, CA Allowing art lovers and collectors to interact and view the most current artworks the couple have created. To plan a visit please contact them directly through [email protected] 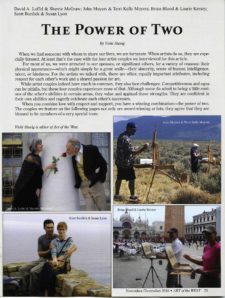 Brian Blood and Laurie Kersey in Art of the West Magazine, December 2018

When we find someone with whom to share our lives, we are fortunate. When artists do so, they are especially blessed. At least that’s the case with the four artist …