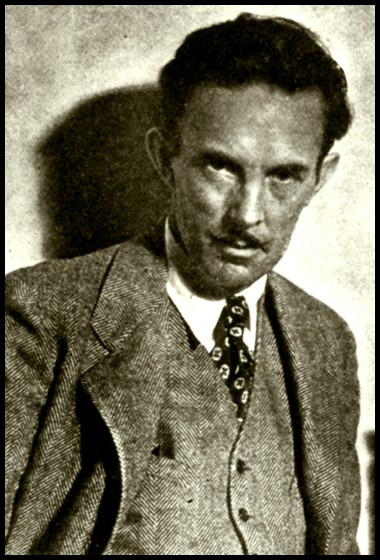 Carl Oscar Borg was born in a soldier’s hut named Östebyn östre (East Village) in the rural parish of Grinstad, Sweden in Dalsland province on March 3, 1879. His father was Gustaf Eriksson Borg and his mother was Kristina Olsdotter. Carl Oscar was the oldest of six children. His father found occasional work to feed the family, but they lived in poverty.

Carl Oscar was not given a formal education, but he was ambitious and began teaching himself how to draw by copying book illustrations. He helped raise money for the family by working for neighbors. At age fifteen he became an apprentice to a decorative painter who painted designs for traditional Swedish houses. Then, at age twenty, he moved to the capitol city of Stockholm where he found work as a ship painter. Working aboard a ship allowed him the opportunity to sail to Paris and then to London where he disembarked.

In London, Borg was robbed of all his belongings and had to live on the streets until he learned some English and managed to find employment as a theatrical scenery painter. He also became an assistant to George Johansen, a lesser-known artist who specialized in portrait and marine subjects.

In 1901 Borg decorated a Norwegian sea captain’s cabin in exchange for passage to the United States. The opportunity landed him in New York, and for two years he worked as a decorative house painter and took on a variety of jobs to earn money. In 1903 Borg signed on to the commercial cargo liner, SS Arizonan, as a seaman and jumped ship in San Francisco. (The Arizonan was later acquired by the United States in 1918 to enter World War I.)

From San Francisco Borg walked the railroad track to Los Angeles, taking on odd jobs along the way. In Los Angeles, he became a partner in a sign and photography studio and began meeting people in L.A.’s burgeoning art scene, chief among them was Charles Fletcher Lummis (1859-1928). Lummis was already famous as a U.S. journalist who traveled the American Southwest on foot from Cincinnati to Los Angeles when he accepted the position of first City Editor of the Los Angeles Times. (Lummis published his encounters from the 3,507-mile journey in his book, A Tramp Across the Continent (1892).) Lummis was an advocate for Indian rights, a historic preservationist, photographer, ethnographer, archaeologist, poet, city librarian, and founder of the Southwest Museum.

Through Lummis, Borg became further captivated with the land and culture of the Southwest, an inspiration that continued throughout his life. Borg’s first survey into painting scenes of the Southwest came through a commission from the University of California system and the United States Bureau of Ethnology. The project was to document the vanishing life of the Southwest Indians. His first exhibition of these paintings was shown in San Francisco in 1917. Borg continued visiting the Navaho and Hopi tribes each spring for fifteen years. The Atchison, Topeka and Santa Fe Railway purchased some of his Southwest paintings, including dramatic scenes of the Grand Canyon, for promotional purposes. The respect that Borg showed the Indians resulted in his being adopted into the Hopi Snake Clan. This adoption gained him rare access to their sacred ceremonies, and he was given a new tribal name, Hasten-na-va ha-sa, meaning ‘The Man Who Comes in Spring.”

Lummis’ wife, Eva, introduced Borg to the established landscape artist William Wendt (1865-1946) who became an important influence in Borg’s art. Wendt introduced Borg to the local arts community and Borg became a founding member of the Painter’s Club of Los Angeles in 1906, which reorganized as the California Art Club in 1909 where he was also a co-founder along with Wendt. Eva also introduced Borg to Phoebe Apperson Hearst, mother of businessman and newspaper tycoon William Randolph Hearst. Phoebe Hearst was impressed with Borg’s artistic ability and became his patron. She funded Borg’s five-year art education in Paris and Rome and his trips to Europe, North Africa, and the Southwest.

In 1918 Borg married Madeline Carriel, a much younger woman, and built a home and studio in Santa Barbara. While in Santa Barbara he taught at the Santa Barbara School of Arts (1918-1924) and became good friends with the local cowboy artist Edward Borein (1872-1945). Borg and Borein traveled and painted western scenes together. In 1924 Carl Oscar Borg and his wife moved back to Los Angeles, settling in Hollywood. One of Borg’s students at the California Art Institute introduced him to Douglas Fairbanks. Fairbanks was looking for an art director for his next film, The Black Pirate, and hired Borg. The motion picture became America's first full-length film in color (released in 1926, silent). Borg’s career was taking healthy roots in California. In addition to his work with Fairbanks, from 1926 to 1929, Borg was art director for major Hollywood studios. He worked with Samuel Goldwyn and Cecil B. DeMille, and made seven films that featured some of the era’s biggest stars, including Ronald Colman and Gary Cooper.

After 1929 and the beginning of “talkies,” movies started being filmed mainly outdoors, thereby eliminating the need for scenic backdrop painters such as Carl Oscar Borg. Also in 1929, came the hardship of the Great Depression, and by 1930 Borg lost most of his savings. At this time, his wife Madeline left him for a younger man. Depressed, he returned to Sweden in 1934. The Swedish press hailed him as “The Great Indian Painter.” He returned to Los Angeles in December and rented his old Santa Barbara studio while he sought a divorce from his wife.

Modernism was taking hold of the art world, and in 1936 when Borg had an exhibition of his Southwest paintings in New York, the work received mixed reviews. Again depressed, he returned to Sweden. This time, he met Miss Lily Lindstrand and the two struck up a romance, which was cut short due to Borg being called back to Los Angeles to complete several new commissions, including film work with Cecil B. de Mille. The following year in June, he returned to Sweden to see his dying father for the last time. On October 3,1938 Carl Oscar and Lily were married in the Swedish Church in Copenhagen, Denmark. The couple settled in Göteborg and Borg became a local painter. Borg’s Southwest subjects were popular in Sweden, and he donated a collection of his watercolors and etchings as well as his sizeable collection of Southwestern Indian artifacts to the National Ethnological Museum. The contribution earned him the Linne Medal by the Royal Swedish Academy of Science.

Although a naturalized American citizen, Borg was not permitted to leave Sweden for the U.S. during World War II.  Finally, in 1945 Carl Oscar and Lily were able to return to his beloved Santa Barbara where they purchased a home and turned the second floor into his studio. In 1947 old friends invited them to travel to San Francisco together. Borg declined, however, Lily reluctantly agreed to go without him. The following day on May 8, Borg painted in his studio, then walked to a favorite restaurant for Spanish food. In the restaurant he had a massive heart attack, and at the age of sixty-eight he passed away in the ambulance on the way to the hospital. In accordance with Borg’s wishes, his ashes were cast to the winds in the Grand Canyon.

Carl Oscar Borg’s place in art history fits in multiple camps. He worked in various media, including watercolor, gouache, oil, etchings, and woodblocks, and he painted diverse subjects. His images of Southwestern culture fit among the Taos Art Colony with such artists as Joseph H. Sharp (1849-1953), E. Martin Hennings (1886-1956), Walter Ufer (1876-1936), Victor Higgins (1884-1949), and Oscar Berninghaus (1874-1952). Borg’s scenes of California landscapes and coastal regions belong in the school of California Impressionism along with artists Edgar Payne, Maurice Braun, Hanson Puthuff, and William Wendt. His paintings of North Africa and Egypt can easily fit in Orientalist collections that include works by Frederick Arthur Bridgman (1947-1928) and Edwin Lord Weeks (1849-1903). Borg was a versatile artist with a restless spirit who searched for ethnic traditions and open frontiers.

In 1936 Borg gifted his paintings and other materials to American Swedish Historical Museum in Philadelphia, which was founded in 1926. Paintings on permanent display include On The Island of Santa Cruz, c. 1920 and The Hopi Corral, c. 1915.
Borg was a member of the National Academy of Design National Academy of Arts, Société Nationale des Beaux-Arts and the Salmagundi Club. His works received numerous awards and gold medals, and are included in the collections of many important museums, universities, and private collections throughout the United States, including Harvard University, Brigham Young University, Smithsonian American Art Museum, and the Fine Arts Museums of San Francisco.