American artist Casey Childs was born in Powell, Wyoming in 1974 and is currently based in Utah. His formal studies in art began at Northwest College in Powell, Wyoming where he studied under John Giarrizzo and continued at Brigham Young University where he received a bachelor’s degree in painting. After a ten-year stint as a graphic designer, Childs began training under renowned portrait painter William Whitaker, eventually becoming his apprentice. After many years of study, Childs developed a skillful body of figurative and portrait work that are now represented in fine art galleries across the U.S.

Childs’ work has received international recognition and is collected both publicly and privately.

Casey Childs now paints full-time as a fine artist in his north-lit studio, which he designed after the studios of the old masters. Casey and his wife Amanda live in Utah along with their sons Evan, Owen, and Cameron.

Artist Statement
“My work as a whole encompasses an exploration of the human experience. My interest in the people around me comes from the idea that we look at people every day, but we never really stop to SEE them. In every painting I strive to capture the beauty, variations and complexities of the human form. The goal of my portrait work is to capture the soul of the individual–not just their likeness. I’m inspired by the figurative works (to name a few) of Sargent, Fechin, Thayer, Caravaggio and John Giarrizzo. John, my art professor at Northwest College, instilled in me a great love of art and an immense desire to create it. His work and ideas have found their way into mine. I see my work as a self-portrait in that the subjects of my paintings are all a part of me, each painting a learning experience and an exploration of myself as an artist." 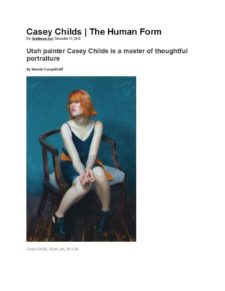 Viewers often wonder where artists find their models. For Utah-based painter Casey Childs, the answer is, everywhere—even at his favorite local café. One day not long ago, Childs was having … 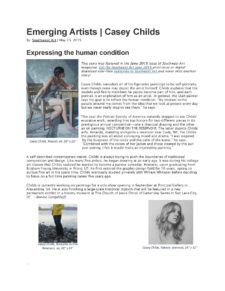 Casey Childs considers all of his figurative paintings to be self-portraits, even though none may depict the artist himself. Childs explains that the models and family members he paints become …