After acquiring a BFA in graphic design with a minor in painting from the Cleveland Institute of Art, Chuck art directed campaigns for a variety of print and media clients and detailed urban revitalization programs for communities participating in the "Main Street" program sponsored by the National Trust For Historic Preservation.

Upon relocating to Southern California, he focused his artistic skills as a restoration expert specializing in early merchandising ephemera and related antiques. His disparate interests contributed to his creation of 221b BAKER STREET/Los Angeles, a full-scale recreation of the sitting room of the famed detective, Sherlock Holmes. As a performer/emcee, he has staged presentations for numerous Fortune 500 companies and hosted the California Art Club's revived lecture series.

​ His paintings investigate a variety of subjects rendered in the "plein air" style of the post-Impressionists. Chuck is an Honor Court member of the Mid-Valley Art League and in 2017 was named to Signature status in the California Art Club. In 2016 he was the recipient of the CAC's "William and Julia Bracken Wendt Award." He is a frequent exhibitor at the CAC's annual Gold Medal show as well as their Old Mill Gallery in San Marino. 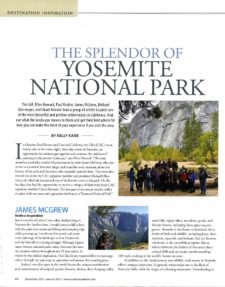 This fall, Ellen Howard, Paul Kratter, James McGrew, Michael Obermeyer, and Chuck Kovacic took a group of artists to paint one of the most beautiful and pristine wildernesses in California. … 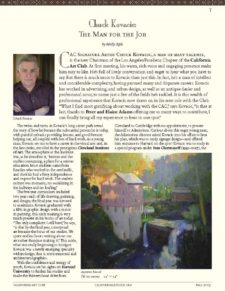 CAC Signature Artist Chuck Kovacic, a man of many talents, is the new Chairman of the Los Angeles/Pasadena Chapter of the California Art Club. At first meeting, his warm, rich …