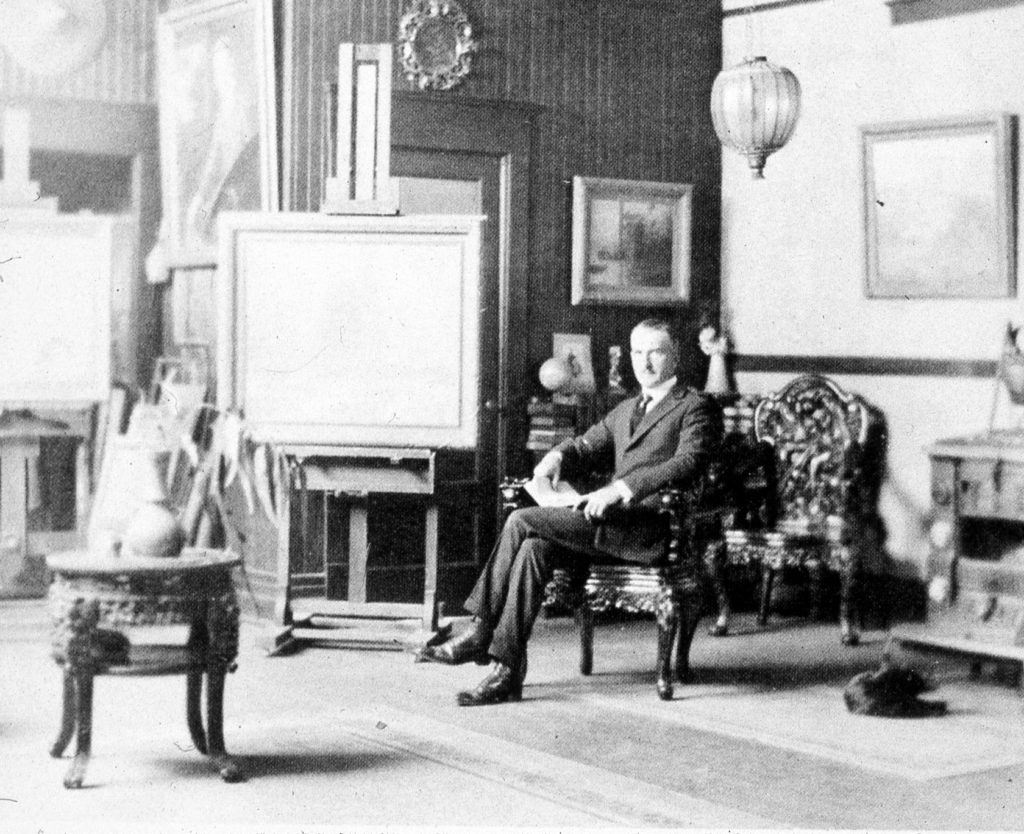 Jack Wilkinson Smith was originally from the East Coast, but had a Western spirit. He was born in Paterson, New Jersey on February 7, 1873 to an artist-father who painted some of the decorations in New York’s state Capitol Building in Albany. His East Coast roots were deep, as his grandfather owned an eighty-acre farm in New York, which now includes Madison Square Garden.

In his teens, Smith was already an aspiring artist. He dropped out of school and worked his way to Chicago where he attended the Art Institute of Chicago and apprenticed under George Gardner Symons (1863–1930). Later, Smith traveled to Lexington, Kentucky where he established himself as a sign and scenic painter. It was during this period that he met and married Emma B. Troop. Also in Lexington, he held his first solo fine art exhibition, which drew the attention of cartoonist Winsor McKay (1867(?)-1934) who helped Smith get a job as a newspaper artist on the Cincinnati Enquirer. While in Cincinnati, Smith studied under Frank Duveneck (1848-1919) at the Cincinnati Academy of Art. Then, in 1898 during the Spanish-American War, Smith traveled to Cuba to sketch frontline combat scenes, which brought him national notice. However, it was the western landscape that beckoned Smith. Inspired by photographs, he began painting the imagery of the West before actually going there. Feeling encouraged by the sale of some of these works, in 1906 he and Emma moved from Cincinnati to Los Angeles.

Upon the urging of his good friend, western artist Frank Tenney Johnson (1874-1939), in 1926 at age fifty-three Smith moved to “Artists’ Alley” in Alhambra, California, and bought the house next door to Johnson on Champion Place. Fellow artist-neighbors included Eli Harvey (1860-1957), Clyde Forsythe (1885-1962), and Norman Rockwell (1894-1978) who spent many summers at Artists’ Alley. The neighborhood became a favorite gathering place for western artists, and some would travel and paint together in the deserts and Sierra Mountains.

Smith was quickly indoctrinated into life at the colony and the local art community. He became a supportive member of the California Art Club where he served as the organization’s sixth president from 1920 to 1921. Smith’s association with local artists led him to become the primary organizer of the Biltmore Salon with the purpose of displaying and selling work by local artists. The Salon’s inaugural exhibition was held on December 14, 1923 within the newly-opened Biltmore Hotel to an eager tourist market. Smith also had a key role in the start of the Painters of the West group that included twenty-five local artists.

When asked about California, Smith responded, “Why go elsewhere? Where are mountains nobler than the Sierras? Where are seas bluer than off the California coast? Where are forests to compare with our own?” Indeed, he said, “Whatever I have seen elsewhere I have found in California, and more glorious. It is all here.”

During the Depression years, Smith earned his income as a billboard painter for Pacific Outdoor Advertising. As an Impressionist artist, he traveled throughout California in search of inspiring subject matter. His paintings of the Sierra, missions, and seascapes have established Smith as one of California's most important painters. Los Angeles Times columnist Fred Hogue commented, “Jack Wilkinson Smith is the premier painter of California sunlight. He may violate the classic canons of art, but the canvases he creates may cause future critics to revise the accepted canons.” 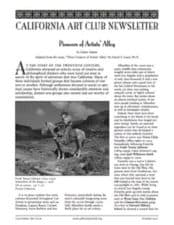 At the start of the twentieth century, California attracted an eclectic array of creative and philosophical thinkers who were lured out west in search of the spirit of adventure that …