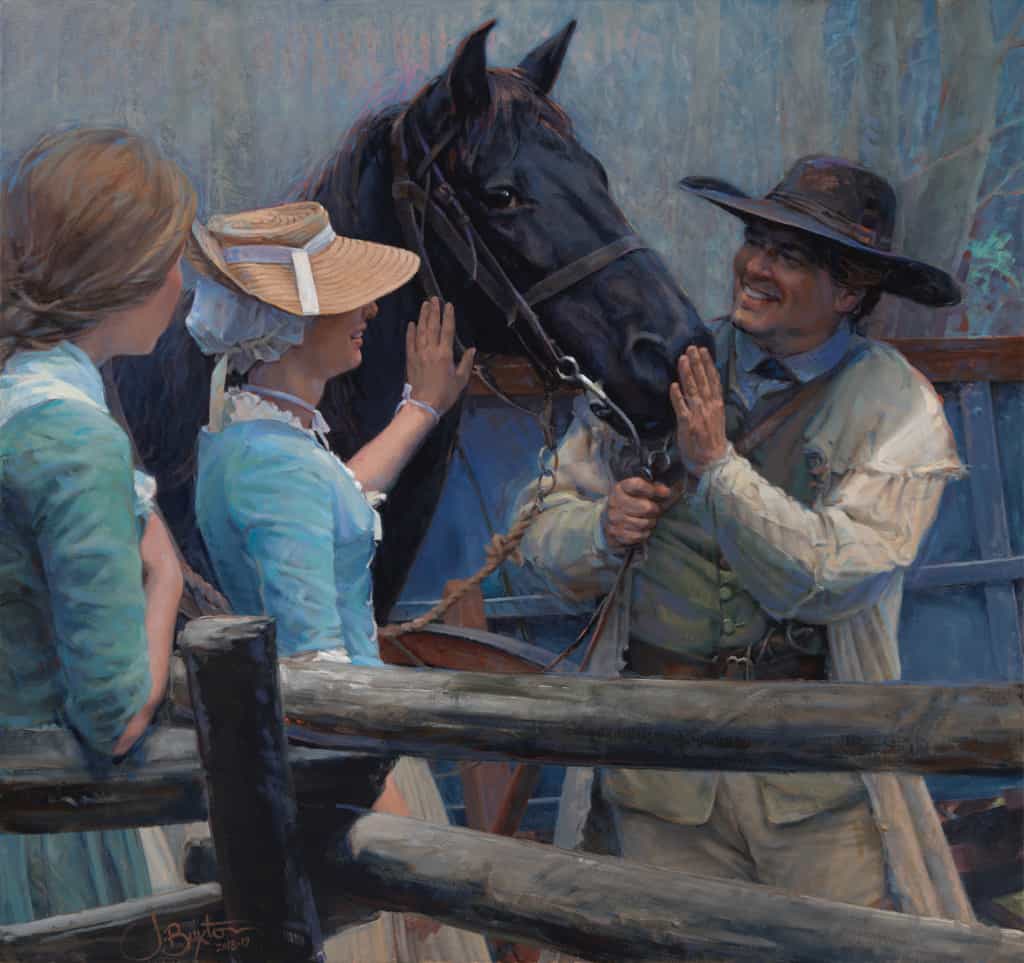 John Buxton's 31 years as a successful illustrator has evolved into these past 20 + years as an honored Fine Artist . Painting scenes inspired by the 18th century Wilderness Frontier. A frontier that influenced the development and relations of "The New World "; it's people and what would become a New Nation.

There have been many awards and accomplishments along his 55 year career. John's work is recognized in the Western Art genre. Perhaps because in the early years of European settlement ... the "West"...did not yet extend beyond the eastern mountain range or the Mississippi River. This allows his paintings to be exhibited at The Masters Of The American West Show at the Autry Museum each year. The Eiteljorg Museum of Indianapolis, also exhibits his paintings in it's Quest For The West Show annually.

History Meets The Arts show, in Gettysburg, PA, will have it's 21 year show for 2018. Buxton's artwork has been shown there from it's beginning.

Settlers West Gallery's American Miniatures Show, every February, is Buxton's only gallery show. Simply because of the time it takes to properly research and paint for the annual museum shows and yearly commissions.

Research, read, more research, or hire an Historian to qualify the authenticity or every detail... before beginning any sketches or developing compositions. IT HAS TO BE CORRECT. Because John's paintings hang in Museums, at Historical sites, are used in documentary films, books & magazines. His images help to bring visual reality to the written word in many classrooms also.

After 31 years of painting almost every subject; using numerous styles and techniques to please countless clients ... why Historical Art now?

Perhaps, because his ancestors were among this countries first settlers? They arrived in the 15th century as a part of first permanent English Colony in North America.... Jamestown. (check your history books) Perhaps John was somehow ordained to become a painter of Frontier life. The life that his ancestors experienced?

NAAAA, not really. It was only recently that he learned of his family connection to the Jamestown Colony... and was amazed & honored.

Regardless, what could be more exciting than putting together 250 year old painted scenes of Colonial figures, horses, wagons, landscapes, forts & cabins? It keeps the Old Geezer Artist out of trouble, happy, and very grateful for the opportunity to paint every day & loving every minute!

Born in 1939 in Oxford, NC . Attended UNC, before graduating with a BPA degree from Art Center College of Design in CA. His Illustration career began in Detroit, through Cleveland & settled in Pittsburgh @ Pitt Studios where he married the cute little receptionist. Had two children, Bryan & Megan. Now he & Noralee (the cute receptionist) have five grandchildren.