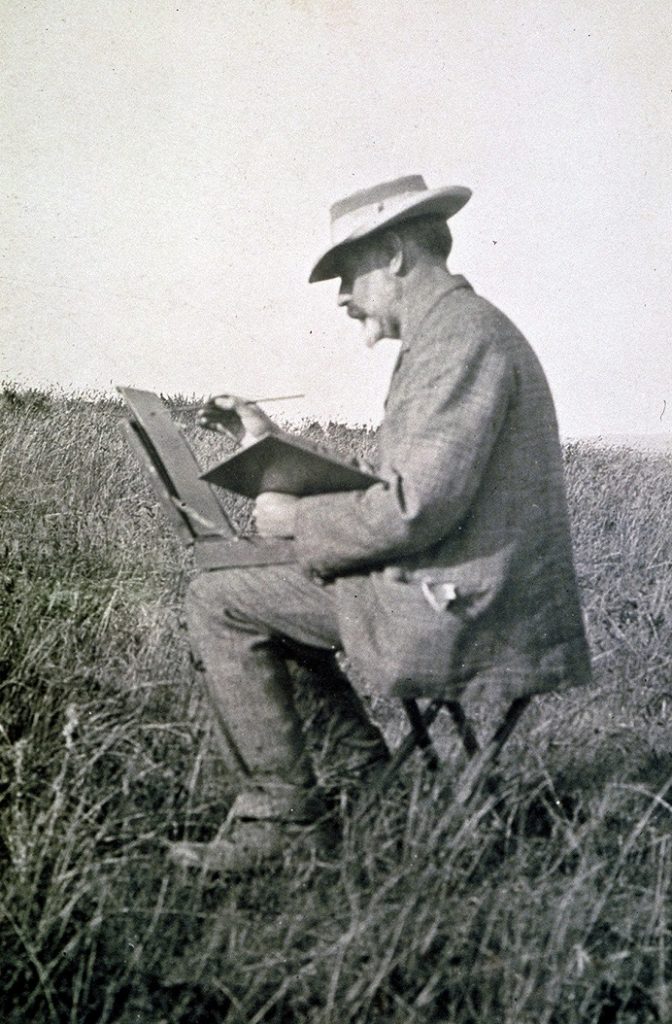 John Marshall Gamble was born on November 25, 1863, in Morristown, New Jersey. His father worked on the Pacific Mail Steamship Company which carried U.S. mail via the San Francisco-Panama City route. His grandfather, John Marshall Gamble (1791-1836), after whom the artist was named, was a Brevet Lieutenant Colonel in the U.S. Marines and the only known U.S. Marine to ever command a U.S. Navy ship. Lieutenant Colonel Gamble commanded the prize ships Greenwich and Sir Andrew Hammond while in naval actions in the Pacific during the War of 1812.

When John Gamble was a teenager, he and his family moved to Auckland, New Zealand. In 1883, at age twenty, he moved to San Francisco. With an interest in art studies, John Gamble enrolled at the San Francisco School of Design (now, San Francisco Art Institute) where he studied under the school’s Director, Virgil Williams 1830-1886), followed by Emil Carlsen (1853-1932), who succeeded Virgil Williams as Director. From 1890 to 1893 Gamble studied in Paris at the Académie Julian under two of the most influential teachers, Jean-Paul Laurens (1838-1921) and Benjamin Constant (1845-1902).

Along with many other artists, Gamble’s San Francisco studio was destroyed in the 1906 earthquake and fire. He planned to move south to Los Angeles to join his friend and fellow artist Elmer Wachtel (1864-1929). However, while en route, he became enamored with Santa Barbara’s colorful countryside blanketed with wildflowers and decided to stay. In Santa Barbara, Gamble painted plein air scenes of the pastoral landscape, surrounding mountains, and coastal areas in his inimitable rich colors, loose brush, and atmospheric light. He became active in the Santa Barbara community. He served as a teacher and President of the Board of the Santa Barbara School of the Arts, and for twenty-five years he was a color consultant for the Santa Barbara Board of Architectural Review.

Gamble’s work is primarily known for pristine California landscapes, often including fields of poppies, lupines, and wildflowers over green rolling hills with backgrounds of purple mountains. His brilliant landscapes were so beloved by the local community that he became known as the dean of Santa Barbara painters.

John Marshall Gamble passed away in his Santa Barbara studio from a stroke on April 7, 1957.