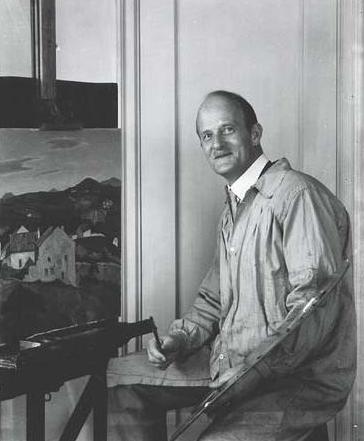 Julius Maximilian Delbos was born on July 23, 1879 in Middlesex, London, England to Leon and Clara A. Delbos. Little is known of his upbringing and education.

In 1920, at the age of forty-one and an accomplished artist and teacher, Delbos moved to the United States, settling in New York City. Soon, he began to spend his summers on Martha's Vineyard, and joined the Martha’s Vineyard Art Association, whose mission was to support the island’s creative community and promote arts education. He usually stayed in Edgartown, but explored throughout the island and was especially fond of the quaint fishing village of Menemsha, on the western end. Eventually, Delbos gained the moniker of “dean” of the local art colony.

Delbos exhibited his watercolors at Ainslee Galleries in New York City in 1923, and in that same year he entered his first annual exhibition at the National Academy of Design. He continued exhibiting with the National Academy nearly each year until 1965. Curiously, when he initially filled out the Academy’s questionnaire, he skipped the section that asked for his art education and left it blank.

Delbos exhibited his paintings in several prestigious institutions, including the Corcoran Gallery in Washington, D.C. (1930 and 1937); Pennsylvania Academy of the Fine Arts, Philadelphia (1930 and 1936); Art Institute of Chicago, Illinois; New York Watercolor Club (1935), where he received an award; National Arts Club in New York City; Connecticut Academy of Fine Art; Society of Independent Artists; and American Watercolor Society, where he received several prizes.

Immigration records show that between 1920 and 1950, Delbos made ten trips from the United Kingdom to New York, and once in 1922, he entered the United States from Montreal, Canada. In 1943 Kleeman Galleries in New York held an exhibition of Delbos’ watercolors, which included works done that summer in Maine at Bar Harbor and Mount Desert Island. Through the 1920s the titles of works shown in the National Academy’s annual exhibitions indicate that he had spent time in France and Spain. He also enjoyed painting in the American south.

In 1945, Delbos was elected an Associate Member of the National Academy of Design in the recently-added classification of watercolor. Three years later, in 1948, he was promoted to full Academician. Delbos painted in both watercolor and oil, but it was his watercolors that were winning him praise.

From 1946 to 1960 Delbos taught art in Greenwich, Connecticut at the private secondary schools, Rosemary Hall and Haithcock School. During this time, he also taught art and music at Hunter College of the City University of New York. He was also an accomplished pianist.

In his later years Delbos spent winters in Georgia and Tennessee. A man of many talents and interests he besides painting and piano, he also authored a book on the monuments of Cambridge, England, and gave readings from Shakespeare.

Julius M. Delbos passed away on January 3, 1970 in New Jersey at the age of ninety-one.