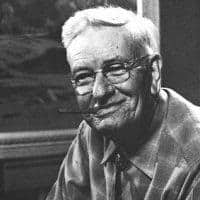 Samuel “Sam” Hyde Harris was born on February 9, 1889 in Brentford, Middlesex, England. His father was David Remnant Harris (1854-1919), a regular working-class man, and his mother was Eliza Hyde Harris (1859-1892), second wife to David Harris. Sam was one of seven children. His mother passed away when he was only three years old, leaving his father to raise a large family alone. An elderly neighbor befriended Sam and encouraged him to pursue his art-making interests.

At fourteen years of age Sam Hyde Harris was already a productive commercial artist. A 1903 letter of recommendation from the British photo-engraving firm, Andre & Sleigh, where he worked wrote, "We have the pleasure in stating that Samuel Harris has given every satisfaction during the eight or nine months he has been engaged in our Artists Department."

On November 27, 1903 Harris and his family arrived to America on Ellis Island after sailing The Cedric from Liverpool. The family settled in Los Angeles and his father and half-brothers began a slate tile and roofing business. Sam Hyde Harris enrolled in classes at the Los Angeles Art Students League and the Canon Art School, where he studied with the Impressionist painters, Frank Tolles Chamberlin (1873-1961), Hanson Duvall Puthuff (1875-1972), and the early modernist Stanton McDonald-Wright (1890-1973). Harris began working with Puthuff in 1906 and the two became life-long friends. Harris’ early works particularly show a strong influence from Puthuff, with similarities in their fluid brushstrokes, and plein air subject matter. His first American employment was in 1906 with Charles R. Mogel and Aaron E. Kilpatrick where he worked primarily as a sign and billboard painter.

In 1913 Sam Hyde Harris returned to Europe and spent five and a half months traveling through England, France, and Belgium studying the works of old masters in museums and visiting art galleries. He found particular inspiration from the paintings of John Constable (1776-1837) and J.M.W. Turner (1775-1851). After he returned to Los Angeles, he continued his commercial art business and furthered his enthusiasm to develop his fine art work.

On January 15, 1917 Harris married Phoebe Katherine Mulholland (1896-1978), the niece of William Mulholland (1855-1935), the self-taught civil engineer who designed and built the 233-mile-long Los Angeles Aqueduct to move water from Owens Valley to San Fernando Valley. The aqueduct project began in 1905 and was completed in 1913, four years before Phoebe and Sam were married. At the time of their marriage, the Mulholland name in Los Angeles was well known. Sam and Phoebe had three sons, Donald Hyde, Samuel Hugh, and Bruce Richard.

The six-foot-three outgoing Harris developed a reputation for doing excellent commercial art work and at age twenty-five he opened his own studio at 113 West 6th Street in Los Angeles. His business began to flourish in 1920 when he was hired by the Atchison, Topeka, and Santa Fe Railway Company to work on their poster advertising campaign. Harris’ roster of prestigious clients included Southern Pacific Railroad, Union Pacific Railroad, Santa Fe Railway, and the Pacific Electric “Red Cars.” As a sidenote, Harris never learned to drive and relied on the Red Car for Los Angeles-area transportation. One of his most recognizable commercial works was for Van de Kamp Bakeries for whom he created the famous Blue Windmill logo and lettering.

In 1919 Harris moved his business, “Sam H. Harris, Posters, Art Titles, Letterings,” to 631 S. Spring Street on the 6th floor of the Realty Board Building, where it continued until a 1938 fire destroyed the building. Harris’ prolific work with the railroads was recognized in 1997 when the California State Railroad Museum in Sacramento held an exhibition titled Sam Hyde Harris: Railroad Advertising Artist.

As his commercial business was increasing, Harris felt freer to begin exhibiting his plein air works. His first recorded exhibition was in 1920 when he joined the California Art Club. He exhibited Sand Dunes at the club’s 11th Annual Gold Medal Exhibition held at the Los Angeles Museum of Science, History, and Art in Exposition Park (now, Natural History Museum of Los Angeles County). From that time, he continued exhibiting his work and winning numerous awards. Harris became involved with several art organizations, including Artists of the Southwest, Mid-Valley Artists' Guild, San Gabriel Fine Arts Association, Glendale Art Association, Valley Art Guild, and San Fernando Art Association. He served as president of the San Gabriel Artists' Guild, as well as Laguna Art Association, and Whittier Art Association. His honors included recognition as a fellow of the American Institute of Fine Arts and life membership in the California Art Club.

While developing his fine art work, Sam Hyde Harris created many paintings of his immediate surroundings of the San Gabriel Valley and nearby San Pedro Harbor. In the 1920s and 1930s, he and Hanson Puthuff went on numerous painting trips together, particularly to pristine areas of Arizona and California, traveling in pursuit of atmospheric landscapes. Aside from landscape painting, Harris also painted scenes of the working-class life, a subject familiar to him from his early upbringing. Unlike his commercial work, Harris did not create his fine art to win mass appeal. Nevertheless, his fine art achieved popular acclaim and sold well and received abundant recognition from his peers. He was the recipient of more than 100 awards and purchase prizes from colleges, community organizations, and leading art associations.

In 1935 Harris began teaching at the Chouinard School of Art as well as privately for several years. He emphasized composition to his students as the “backbone of art” and stressed to “Keep it simple.” Los Angeles Times art critic, Arthur Millier, wrote on Augst 31, 1941 in a review of Harris’ solo exhibition held at Armand DuVannes Gallery in Los Angeles, “Harris' finest piece is Rain, a scene of hills under cloud and sun. It achieves dignity through fine space composition and variety through color and atmosphere. This Southland painter knows trees as the poetic The Grove and Arcadia testify. His best pictures present broad effects. When he overcrowds with details the results are less distinguished. Harbor and city provide subjects which he paints descriptively and poetically.”

The 1930s brought on the Great Depression and Modernism. Modernist artworks were beginning to show up in prominent exhibitions, and many artists were indignant. In 1936 the Society for Sanity in Art was founded in Chicago by Josephine Hancock Logan, a leading patron of the Art Institute of Chicago, in support of representational art forms. The society’s branches grew around the country and Harris became a strong advocate. Later, the Society for Sanity in Art in Southern California was renamed Artists of the Southwest. The outspoken Sam Hyde Harris is quoted as saying, “The modernists rule the roost now. I won't even enter some of my paintings in their contests. I've seen some I liked, but most of it is non-understandable. There are three criteria for judging a painting. What did the artist have to say, did he say it and was it worth saying. If an artist can answer those three questions, then he has a work of art." (Alhambra Artist, 82, continues in career begun 67 years ago, Alhambra Post-Advocate, February 16, 1971, p. B-1)

In its heyday, Artists’ Alley attracted leading western-genre personalities and artists, including Will Rogers (1879-1935), Charles M. Russell (1864-1926), Edward Borein (1872-1945), Maynard Dixon (1875-1946), and James “Jimmy” Swinnerton (1875-1974) — together they shared many painting trips to California’s Mohave Desert. Harris became friends with Swinnerton who inspired Harris to paint desert scenes. In addition, the nearby Arroyo Seco, Chavez Ravine, and San Pedro Harbor became favorite locations of inspiration for Harris to paint. The spirit of the Old West and the tradition of landscape painting at Artists’ Alley was conducive to Harris’ own interest as an artist. In 1950 after Jack Wilkinson Smith and his wife Emma had passed away, Harris purchased Smith’s studio located at 16 Champion Place and became the last artist at Artists’ Alley.

Los Angeles Examiner art editor, Howard Burke, described Harris’ charisma in a June 5, 1960 article titled Harris’ Brush Imparts Drama: “This debonair artist has a sunny personality that is transmitted directly to his paintings, reflecting the light, atmosphere and cheerful California scene to the fullest.” An avid plein air painter, Harris is quoted as saying, “I love the outdoors. I don't belong to any church, but I approach my work with reverence. You have to want to paint landscapes, you must love the outdoors and you have to be willing to sweat.” (Arthur Millier, Art Parade Reviewed, Los Angeles Times, August 31, 1941)

A retrospective exhibition of Sam Hyde Harris’ work was held at the Alhambra Community Hospital and opened just twelve days before his passing on May 30, 1977. The San Gabriel Sun wrote about the exhibition, “With his strong compositions and subtle colors, San Hyde Harris captured a time and a feeling long past in a motorized and suburbanized Southern California. …The past lives on in the eloquence of his paintings.”

Research Sources:
Sam Hyde Harris, The Atmosphere of the Southland by Jeffrey Morseburg; Who Was Sam? The Art of Sam Hyde Harris by Marian Yoshiki-Kovinick in accompaniment of the exhibition held in 2007 at the Pasadena Museum of History with the same title; Distinguished Artist Series by Ruth Westphal; Pioneers of Artists’ Alley by Elaine Adams, published California Art Club Newsletter, Summer 2007; California Art Club’s Historical Membership Roster; and AskART