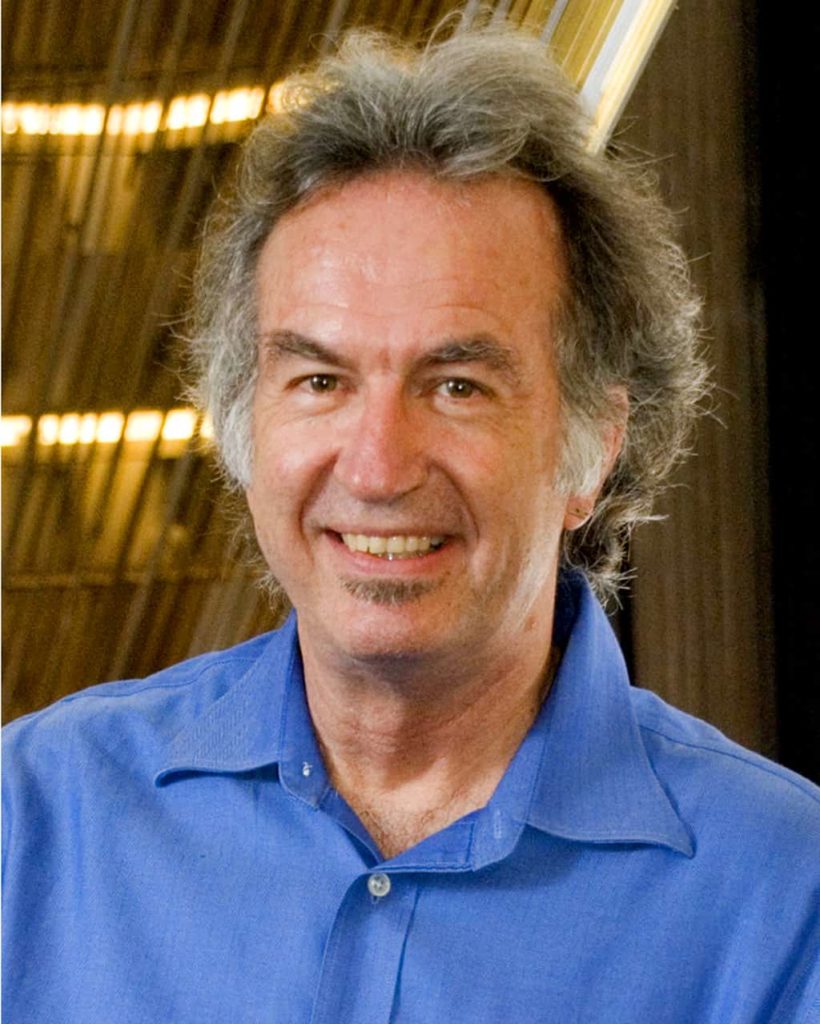 William Stout was born in Salt Lake City, UT in 1949. At seventeen he won a full California State Scholarship to the Chouinard Art Institute (California Institute of the Arts) where he obtained his Bachelor's Degree. Stout began his professional career in 1968 with his cover and illustrations for the first four issues of the pulp magazine Coven 13. In 1971 he began to assist Russ Manning on the Tarzan of the Apes newspaper strips and Eisner Award-winning graphic novels. In 1972 Stout joined Harvey Kurtzman & Will Elder on Little Annie Fanny for Playboy. In 1973 Stout gained international notoriety in 1973-74 for his 45 "bootleg" record album covers.

1977 proved to be an especially productive year for William Stout: he created his first movie poster, WIZARDS, which ultimately led to developing promotional artwork for more than 120 films; he became the first American art contributor among his European counterparts for Heavy Metal magazine; and held his first solo exhibition, The Prehistoric World of William Stout. In 1978 Stout began his career in the film industry and has worked on more than 45 feature films, including the Conan movies, First Blood, Raiders of the Lost Ark, Walt Disney’s Dinosaur, Masters of the Universe, The Hitcher, and Pan’s Labyrinth, which resulted in his winning two of the Oscars and won Stout a 2006 Chesley Award. Return of the Living Dead made Stout the youngest production designer in film history.

Stout's dinosaur illustrations and murals have appeared in many publications, became the subjects of multiple exhibitions. In 1981 Bantam Books published Stout's bestselling landmark masterwork, THE DINOSAURS-A Fantastic New View of a Lost Era, followed by The Little Blue Brontosaurus (recipient of the 1984 Children's Choice Award; adapted as animated feature The Land Before Time) and Ray Bradbury's Dinosaur Tales. Eleven dinosaur-theme paintings by Stout were selected for inclusion in the traveling exhibition Dinosaurs Past and Present, which was seen by more than two-million visitors at the Smithsonian in Washington D.C. Author Michael Crichton acknowledged Stout's work as inspiration for his book Jurassic Park. In 1993, Universal Cartoon Studios chose Stout to design a prime time animated series of Jurassic Park. Stout’s prehistoric paintings and murals are on permanent display at the Houston Museum of Natural Science, Walt Disney’s Animal Kingdom, the San Diego Natural History Museum, the San Diego Zoo, the Orton Geological Museum, the Museum of the Rockies, the North Carolina Museum of Natural Science and the Lagoon Discovery Center (Carlsbad, CA).

Stout worked for Walt Disney Imagineering from 1986 to 1989 as a conceptual designer, writer, and producer for expansions to all their properties. He subsequently continued themed entertainment design for Disney, Universal and Landmark Entertainment Group. In 1995, Steven Spielberg made Stout Senior Concept Designer for GameWorks, a joint gaming arcade project between DreamWorks SKG, Universal, and Sega. Since then Stout participated in designing themed entertainment centers such as Michael Jackson’s NeverLand, the Kansas City’s Wonderful World of Oz theme park as well as a Toronto Dinotopia-themed park.
William Stout resides in Pasadena, California with his wife, frequently visited by his sons and grandchildren.

2015 Stout invited to exhibit in REVOLUTIONS 2 – Music as Art, the largest show in the history of the Forest Lawn Museum, where he exhibited more than 50 works
2010 Menagerie – The Art of Animals, an exhibition on the history of animals in art co-curated by Stout, opened at the Forest Lawn Museum in Glendale, California
2010 Laguna College of Art + Design hosted a huge Stout retrospective, his largest to date. Attendance at the show and Stout’s lecture broke all previous records for the college
1995 “One Man and Twenty Women” one man show of Stout’s figure drawings at the Carnegie Art Museum

2013 Legends of the Blues, Stout’s book featuring 100 portraits and biographies of Stout’s favorite blues musicians and singers (born prior to 1930) was published Abrams

Bill’s other recent books include Tribute to Willis O’Brien (volumes one and two), Fantastic Women (volumes one and two), Tyler’s Third Act and Flesk Prime. Stout’s own publishing company, Terra Nova Press, has published over fifty books on art and the history of art. He is currently at work on multiple themed sketchbooks, as well as his second blues volume for Abrams, Legends of the British Blues (a book containing 100 more portraits and biographies by Stout) and a long-awaited career retrospective volume from Insight Editions, Fantastic Worlds of William Stout. 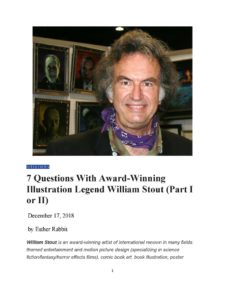 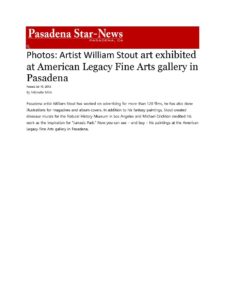 Pasadena artist William Stout has worked on advertising for more than 120 films, he has also done illustrations for magazines and album covers. In addition to his fantasy paintings, Stout … 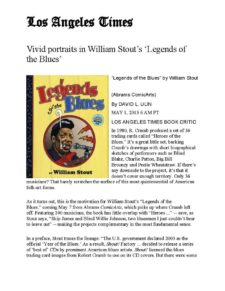 As it turns out, this is the motivation for William Stout’s “Legends of the Blues,” coming May 7 from Abrams ComicArts, which picks up where Crumb left off. Featuring 100 …