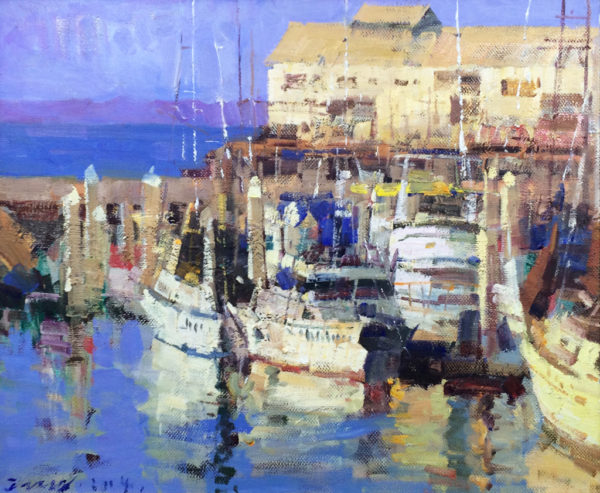 Description
Cannery Row, Monterey" is a strong example of Jove Wang's expressive style that includes his particular palette of rich color and confident painterly approach. Also, the choice of this subject makes the painting additionally important due to the historic significance of California’s history in the commercial fishing industry, which began with early communities of industrious Chinese immigrants.

History
Beginning in the 1850s Chinese fishermen were the first to make Monterey one of California’s most successful fishing ports. By 1853 there were more than 500 Chinese fishermen working off Monterey. The bay waters were abundant with abalone, cod, halibut, flounder, yellowtail, sardines, squid, shark, oysters, and mussels. The daily fresh catch was marketed to fishmongers on Clay Street in San Francisco, and some of the fish, including shark’s fin and squid were dried to be shipped to Canton, China to market.

In the later 1800s conflict developed between the Chinese and new-coming Italian fishermen who began fishing the waters of Monterey Bay. Further competition arose by growing populations of European immigrant fishermen. On the night of May 16, 1906, a fire swept through the Chinese quarter destroying most of the settlement structures. The Chinese settlement never fully recovered, but when the sardine factories were established on Ocean View Avenue, later to be known as “Cannery Row”, many of the Chinese descendants of the early fishermen contributed to the new fish canning industry.

Cannery Row was made famous by American author John Steinbeck in his novel “Cannery Row” published in 1945. The story is set during the Great Depression in Monterey, California, on a street lined with sardine canneries, and revolves around the people living there. In the novel's opening sentence, Steinbeck described the street as "a poem, a stink, a grating noise, a quality of light, a tone, a habit, a nostalgia, a dream." The street name, formerly a nickname for Ocean View Avenue, became official in January 1958 to honor John Steinbeck and his popular novel Cannery Row. The last cannery closed in 1973 and today, Cannery Row is a major tourist attraction that hearkens to California’s early history in the fishing industry.

Additional
in the early 1850s Chinese fishing families crossed the Pacific in junks and settled at Point Ohlones ("China Point") and established Monterey's fishing industry. In 1927, the American Tin Cannery was constructed on this site and survives today as a retail and entertainment center. World War I cannery expansion driven by wartime demand. During World War II the cannery industry in Monterey expanded and became "Sardine Capital of the World" as it fed a world at war with the plentiful and nutritious Monterey sardine. In 1945 author Cannery Row by John Steinbeck told of the exploits of a band of bums on Cannery Row, surrounded by bordellos, flophouses, a Chinese grocery store and the laboratory of a man who, in reality, was quietly revolutionizing modern marine biology: Ed Ricketts - the "Doc" of John Steinbeck's Cannery Row.

John Steinbeck's Cannery Row spotlights the legendary lane during its industrial heyday, but the street's true story begins long before canneries lined the former Ocean View Avenue. From Native American, Asian and European settlement, through the boom and bust of the whaling and sardine industries, to structural and economic despair followed by restoration and re-development, the tale of Cannery Row (renamed by Monterey officials 13 years after the release of Steinbeck's novel), continues to fascinate guests. Here, past and present influence the architecture, cuisine, and attractions as Cannery Row continues to celebrate the unshakable spirit on which it was founded.