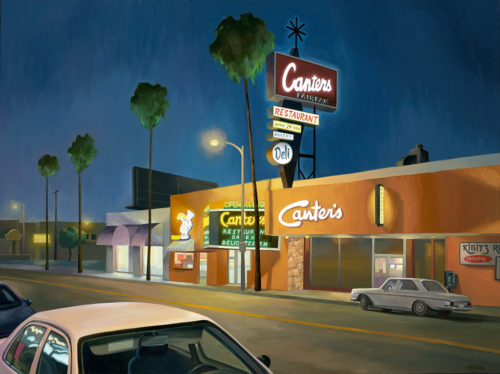 Description
Tony Peters depicts one of California’s most recognized and beloved landmarks, Canters Deli. Located on Fairfax Avenue in Hollywood, in the heart and soul of the entertainment industry, this popular dining establishment has been frequented by celebrities in cinema, radio, and sports, as well as musicians, literary authors, and playwrights, since its founding in 1931. Canter’s is open 24 hours a day, seven days a week, and on all holidays except Rosh Hashanah and Yom Kippur. In this scene, Peters chose to portray Canter's in its magical after-midnight glow with palm trees lining the empty street and Canter's neon signs reflecting in car windows beckoning passersby to come in for one of their famous pastrami sandwiches. In Canters, Tony Peters captures the after-hours aesthetic of Hollywood urban life.