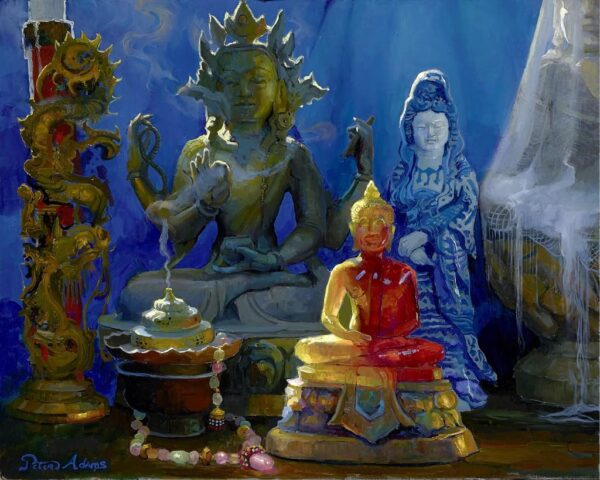 "Being the first American plein air artist to travel unescorted through the People’s Republic of China in 1981 and having served on the board of directors of the Pacific Asia Museum for more than ten years, I have developed a particular appreciation for the Asian culture; the people, their history, and their art. In this painting, “Quality of Mercy,” my interest was in creating a transcendent peace by harmonizing a sense of tranquility and mystery through the use of color. The still life was composed in my studio with the morning light streaming in over the various Asian objets d’arts of diverse textures, including a bronze Tibetan Tara, an amber Thai Buddha, and two Kwan-yins, one of which is veiled in a gauze prayer scarf. The scene is back-dropped by a cool blue silk fabric to stimulate a calming and serene effect while the pop of orange from the amber Buddha is intended to heighten a sense of joy."
— Peter Adams