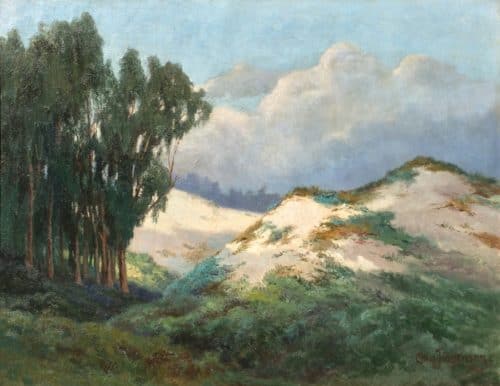 Description
In 1903, as Christian Jorgensen (1860-1935) undertook painting California’s 21 missions, he and his wife, Angela Ghirardelli (1858-1836) of San Francisco’s Ghirardelli Chocolate family, fell in love with the Central Coast, particularly with Carmel-by-the-Sea. As noted in the book, Americans and the California Dream, authored by American historian and California’s State Librarian Kevin Starr (1940-2017), New York and Oxford: Oxford University Press, 1973; pg 267: The seaside hamlet's “…informal community of [creative people] responding to a similar cluster of California imperatives: simplicity, health, art…” had not yet formed in the first decade of the 20th century. But in 1905, shortly after writer George Sterling and photographer Arnold Genthe built retreats in Carmel, the Jorgensens built their magnificent stone mansion near Pebble Beach and the picturesque 17-Mile Drive. They dubbed their home “La Playa” which became Jorgensen’s winter studio from where he painted scenes of the local crumbling mission ruins, majestic ocean views, windswept cypresses, stately eucalypti, rolling sand dunes, and rocky vistas. The Jorgensen home and property later became the foundation for Hotel La Playa, which continues as a luxury hotel to this day. Jorgensen was active in the local community and is recognized as one of the leading pioneers of Carmel's art colony who helped form the Carmel Art Association. His paintings of the Central Coast are desirable in collections of classic California landscapes of the early 20th century.