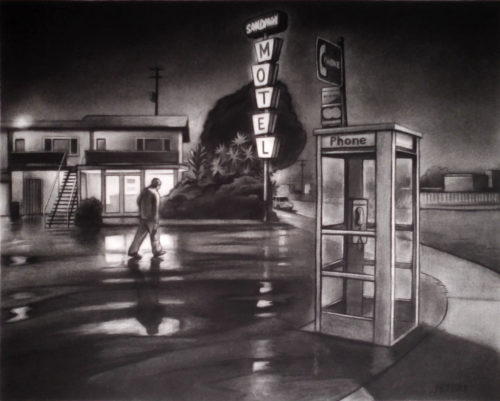 Sandman; Across from Randy’s Donuts

Description
One of L.A.’s most iconic landmarks is Randy’s Donuts in Inglewood. Established during the optimistic postwar era of the 1950s, the popular donut shop has appeared in numerous TV shows and films and is easily recognized for its giant donut on the roof. In his painting, Sandman, Across from Randy’s Donuts, Tony Peters chose to capture the other side of the happy-feeling, attention-grabbing Mid-Century Modern drive-up food stand by depicting a melancholy undertone. The work is created in charcoal to emphasize the psychology of a late, rainy night. Peters heightens the bleak mood by including an empty phone booth, quiet streets, and a solitary man walking past the Sandman Motel, unable to sleep.