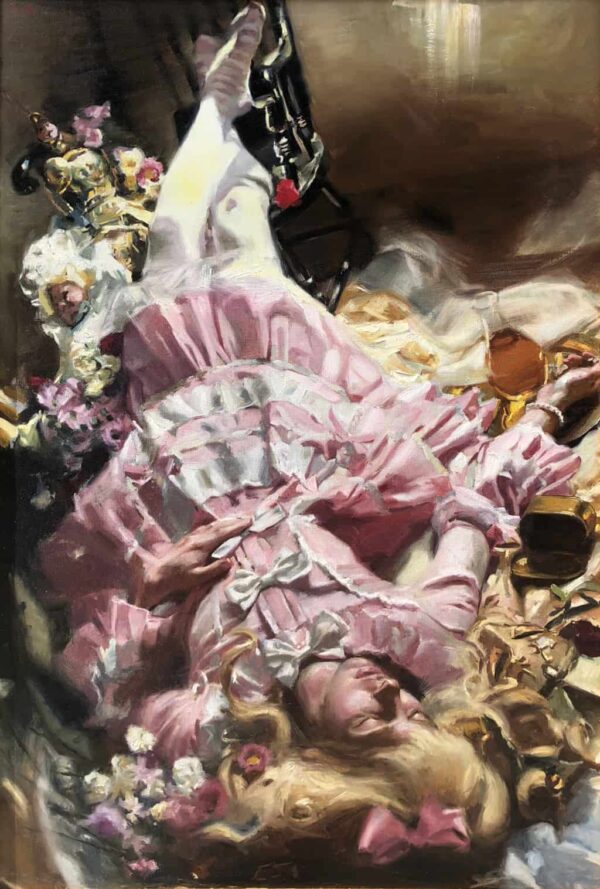 Artist Statement
“The 19th century painter Anders Zorn was a big influence for me on this work. I was looking at his Dance in Gopsmor Cottage while painting, and trying to limit myself to brushes no smaller than an 8. I am quite satisfied with the light effect I achieved.

As you can see I really boosted up the highlight on those stockings! It was a case where the sun had streamed in through an east light window (unwelcome at the time), rendering the model's legs impossibly bright. I've used a very thick impasto and even some cadmium lemon to try and convey the impression of light I was seeing. While executing this painting it occurred to me that this was the kind of unusual lighting and tonality that Zorn would have sought (see his Night Effect in Gothenburg, where the woman in red is lit up by the new street lamps and by an indoor café, or his Omnibus showing Parisian commuters).

I had the opportunity to see a number of Zorns up close on my way through Stockholm and Gothenburg. I also visited his house and museum up in Mora, which was excellent and well worth the visit. I took a few books away with me including a biography called 'Zorn in America.'

This kind of painting was very exciting for me to do. Having been trained foremost at the Angel Academy of Art, I was very founded in a more fully rendered approach and technique.  At school we were often shown pictures of Sargent and sometimes Zorn, however it was not something I ever attempted until most recently. It's exciting to hang a painting like this up next to an older one and see the presence it still has.”
-- Teresa Oaxaca