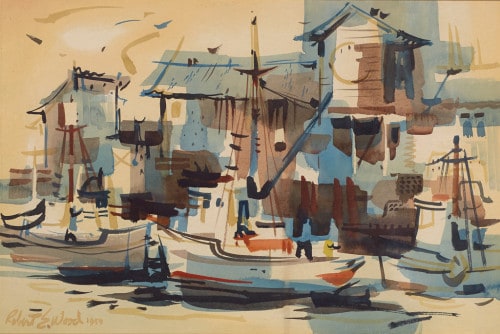 Description
With its style in early abstractionism, while at the same time adhering to representational foundations, this mid-20th-century watercolor painting by Robert E. Wood is a classic example of works created in the post-war era. Wood was part of the California Scene Painting movement (1920-1970), which was inspired by everyday life. In this painting, Wood portrays the age-old livelihood of fishing as it was in 1959 along the Pacific Coast. Here, tuna boats are set against a backdrop of canneries believed to be in San Pedro Harbor's Terminal Island, Los Angeles. The location was made popular by several California Scene Painters including Millard Sheets (1907-1989), as evidenced in Sheets' painting, Fish Harbor, Terminal Island, 1935.

In 1959, the year Robert E. Wood created this painting, the Department of the Interior's Fish and Wildlife Service held a "Tuna Meeting" on July 8 in Washington D.C. with representatives of the Pacific Coast Tuna Industry. The discussion addressed concerns over increased production costs. Suggestions were made that included government assistance in financial loans and conferences with the Japanese government regarding tuna conservation, volume, and price controls.

Sidenote: In 1910 Martin Bogdanovich who immigrated from Yugoslavia began fishing on the California coast. Eight years later, he, along with five partners, began a tuna business and named it the French Sardine Company. In 1942 the company became Starkist, and by World War II they were supplying the U.S. Army with more than half of its tuna output. In 1952 the company completed its biggest tuna cannery on San Pedro Harbor's Terminal Island in Los Angeles. In 1960, the company started its international expansion by opening a manufacturing facility in Puerto Rico. A year after, Starkist’s "Charlie the Tuna" was introduced in television commercials. In 1963 Starkist was purchased by the H.J. Heinz Company and opened a manufacturing facility in American Samoa. By 1980 Starkist was considered the leading brand of tuna in the United States. However, in 1985 the company was forced to close its Terminal Island plant due to the high cost of labor compared with the company’s two other plants abroad. The company is currently owned by Dongwon Industries, a South Korean company. (grocery.com/starkist-company/)

Biography
Born in Gardena, California, Robert Earle Wood was one of the main practitioners of the "California Style" and is known for his watercolor landscapes and marine paintings in a semi-abstract approach. He earned a B.A. from Pomona College and an MFA from Claremont College where he studied with American Scene painters, Millard Sheets, Phil Dike, and Jean Ames.

Just after World War II, Robert E. Wood began seriously studying watercolor painting and was influenced by artists Rex Brandt and Phil Dike. By the late 1940s, Wood was in a graduate program and already exhibiting watercolors in museum and gallery shows. His works from this period often depict regional subjects found near Claremont, where he was attending college, and harbor subjects near Corona del Mar and Newport Beach.

By the early 1960s, he was acknowledged as one of the premier California watercolorists to emerge during the postwar era. The personal style for which be become well-known was clearly developing. While most of his works have been painted with transparent watercolors, he also freely incorporated opaque colors or other complimentary mediums, if he felt they improved a specific work of art. His paintings often balance areas of pure abstraction with stylized, but recognizable subject matter. Throughout his career, Wood divided his time between painting outdoors and working inside his studio.