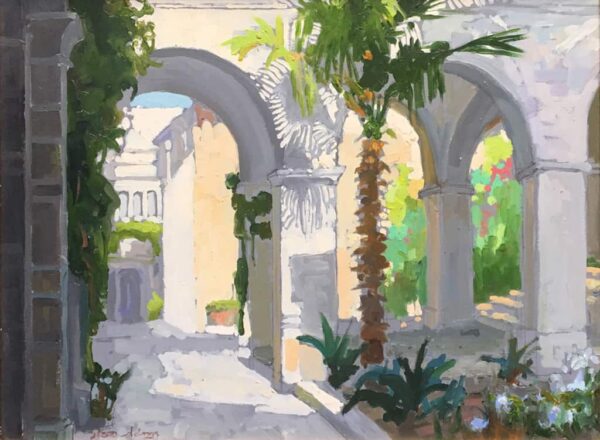 View of the Church of Flaggellation (2nd Station), Jerusalem

Artist Statement
"On the Via Dolorosa, this location is considered to be the traditional Second Station of the Cross where Jesus was given the cross to carry to Calvary.

Here, through the arches, can be seen the Church of Flagellation which houses the Chapel of the Crown of Thorns. In back of where I was standing when I painted this piece is the Church of Condemnation.

I used this painting as a study, or model, for the finished work I did of the Second Station of the Cross, which has been installed at Our Savior Church at the University of Southern California. It is the only plein air work that I did on my trip to Jerusalem in the summer of 2010 that I incorporated into my finished paintings of the Fourteen Stations of the Cross."