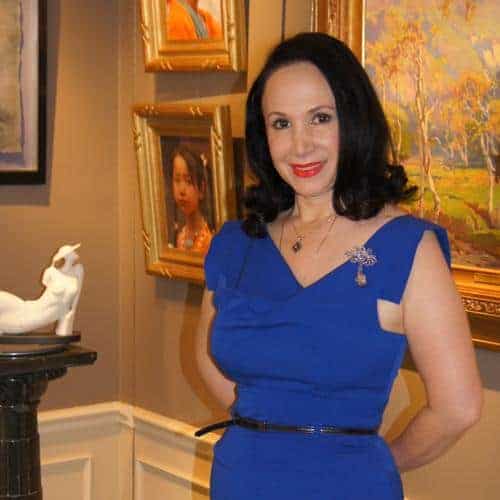 Elaine Adams can be reached at [email protected]

Elaine Adams combines her life-long passion for the arts and her extensive background in art history, research, and writing, along with her experience in executive administration and finance, to provide a unique and personal approach to serving artists and gallery clients. As the wife of American artist Peter Adams, she is actively involved in various capacities in the arts industry, particularly in the contemporary-traditional fine art scene, and is recognized as one of the country’s most dynamic and influential forces in the growing shift away from conceptual art and back to representational, figurative formats. In 2003 she founded American Legacy Fine Arts, a private art gallery specializing in curated selections of contemporary-traditional and historic works of original art. The gallery offers quality personal service to new and established art collectors from around the world.

Publications:
Elaine Adams is an author and lecturer on topics relating to traditional fine arts, classical art training, and California’s arts heritage. As a writer, she has published more than 30 original articles about artists and art history, primarily for the multi-award-winning California Art Club Newsletter. In addition, she has written for the national publication Art-Talk in her own monthly column titled Oro de California (1997-1999). In 2003 her article on Carl Rungius was published in American Art Review. She has also collaborated with New York publishers, Skira Rizzoli, serving as project manager and essayist, on the book California Light: A Century of Landscapes: Paintings of the California Art Club (2010) and the follow-up book California Seascapes and Beach Towns: Paintings of the California Art Club (fall 2017).

Honors:
In November of 1997, Southwest Art Magazine named Elaine Adams one of the country’s “Five Most Notable Women.” The Pasadena Arts Council presented Adams with the Gold Crown Special Award in 2000 for her contributions in advancing contemporary-traditional art. In 2007 the Autry National Center awarded Mrs. Adams with the John J. Geraghty Award for the advancement of traditional fine art in the American West. In 2014 she and her husband, Peter Adams, were granted the Lifetime Achievement award from PleinAir Magazine as well as the Great Art Matters Award from Laguna College of Art and Design for their work in “Communicating the Value of Representational Art.”

Community:
Adams has served on several art committees and cultural boards, including Los Angeles County Museum of Art’s American Art Council (Steering Committee), Pacific Asia Museum (Chair of the 1994 Festival of the Autumn Moon), ArtCenter College of Design (ArtCenter 100 member), Pasadena Symphony (Board of Directors), Rymann-Carroll Foundation (Board of Directors), the American Society of Portrait Artists (Board of Directors), and the California Art Club (Board of Directors). As an art authority, in 2009 Adams, along with two other arts jurors Henry Lien and Chip Tom, selected winning artwork submitted by Laguna College of Art and Design students at Fairhaven Memorial Park in Santa Ana, California; and in 2015 Adams and Christopher Forbes were invited to judge Plein Air Easton’s 2015 Competition, held in Easton, Maryland; and in 2018 she served as the sole judge for the 8th Annual PleinAir Salon Competition hosted by PleinAir Magazine. Since 1993, as a non-paid administrator, she has held the positions of Executive Director/CEO of the historic California Art Club (established 1909), as well as Editor-in-Chief of the California Art Club Newsletter.

Prior to her work in the art world, Elaine Adams studied at the University of Southern California where she received dual bachelor’s degrees in mathematics and economics. After graduation, she worked as an accounts executive for Crowell, Weedon & Co. in Los Angeles, the largest independent investment firm in the Western United States.